So, Gabrielle Blair, going by the handle of “designmom” suggested life insurance as a better way to protect one’s family instead of having a gun and she went on from there.  Twitter link archived here (against possibility of deletion–what happens on the Internet, stays on the Internet). 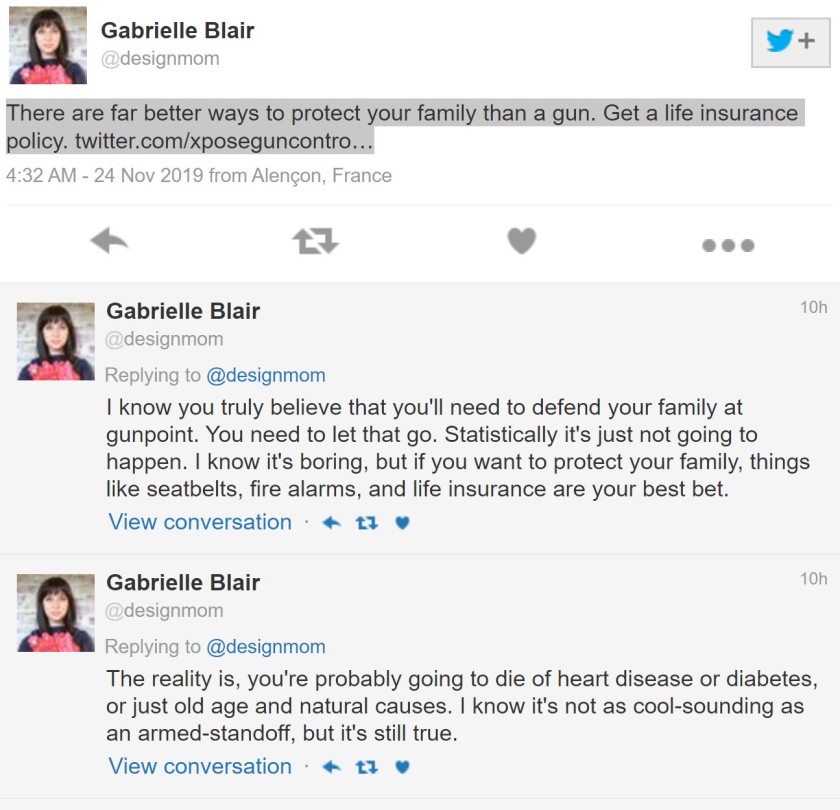 So, let’s look at this.  As usual, person being fisked is in Bold and my comments are in italics.

There are far better ways to protect your family than a gun. Get a life insurance policy. twitter.com/xposeguncontro…

Well, that’s interesting Gabrielle.  Apparently you think that my daughter would prefer to have an insurance payout rather than her father in the event someone with violent intent breaks into our home (or elsewhere–which I’ll get to later).  Perhaps your child or children feel that way about you “designmom” but I’m quite certain my own daughter would rather have me than the couple of hundred large of an insurance payout. (Yes, I do have life insurance, in fact.  But having one does not preclude having the other.)

And that leaves aside the idea that a life insurance policy only “protects” my family from some of the financial challenges they would face in the event of my death.  There are other questions, like who takes care of my daughter in the event of my death–a question that looms large for a single father, let me tell you.  Will they take care of their properly?  Will they be equipped, mentally and emotionally, to deal with her particular challenges?  How much can I really trust them?  Far better, I think, for me to stay right here alive and thus able and willing to care for my daughter.  Perhaps you feel differently about your own children.  And if you do, well, perhaps the fact that you do makes you right to feel that way. (Yes, that’s kind of recursive.)

And then there’s the whole question of if someone takes me down, what prevents them from assaulting, raping, or killing my daughter?  That’s what “protect my family” means, not just provide them money to “replace” my loss, but actually shield them from someone who means them actual physical harm.

I know you truly believe that you’ll need to defend your family at gunpoint. You need to let that go. Statistically it’s just not going to happen. I know it’s boring, but if you want to protect your family, things like seatbelts, fire alarms, and life insurance are your best bet.

Embrace the power of “and”, Gabrielle.  Statistically, one in about two hundred people will be the victim of a violent crime in a year.  According to the Department of Justice There’s an 83% probability of being the victim of an attempted violent crime (Robbery, Murder, Rape, and Aggravated Assault for this purpose) at least once sometime after the age of 12.  In about half that number, the crimes will not just be attempted but completed.  And about a 52% chance (about 2/3 of those who were victimized at least once) of not just being a victim once, but multiple times.

Statistically, I am unlikely to live my life without someone trying to commit a violent crime against me.  And so, while I do wear seatbelts, I do have fire alarms, I do have life insurance, I do eat right and exercise regularly, I do take the medicines my doctor prescribes for me and follow other advice he gives (including vaccinations–do you vaccinate?), I also carry a gun.  Because today might be the day that my 83% comes up.

The same gun I can use to defend myself and my family at home is also (or is in any sane jurisdiction) available to defend myself when away from home–where a lot of those crimes leading to that 83% chance occur.  Probably won’t be today.  Probably won’t be tomorrow.  But pretty good chance it will be sometime.  And I don’t know when that sometime, where that somewhere, will be.  But since I have the gun it’s easy enough to have it with me whenever and wherever it’s legally allowed for me to have it.  Then I only have to worry about those places where it’s not legal to have it, places where people like you would have me left defenseless against folk with ill intent.

So embrace the power of “and” Gabrielle.

The reality is, you’re probably going to die of heart disease or diabetes, or just old age and natural causes. I know it’s not as cool-sounding as an armed-standoff, but it’s still true.

And, indeed, I’d like that to be the case.  I’d prefer to go through my life and never be touched by violent crime.  But…83%, Gabrielle.  Those aren’t “gun nut” statistics.  That’s the Department of Justice.  Those are numbers right out of the Federal Government.  And even if I were unarmed, I might survive the encounter with violent crime.  After all, most of those violent crimes are not murder.  But I’d really rather not put my trust in the criminals for the outcome, the decision as to whether I live or die, hmm?  Perhaps you’d rather trust to the criminals for your own safety.  If so, well, that’s your choice.  You do you.  Just don’t make that choice for me.

If the topic of protecting your family comes up, a gun extremist will immediately imagine an armed intruder who has come to murder. That’s not going to happen. It’s rare enough that it’s not something people need to worry about or make decisions based on.

Once again, the Department of Justice disagrees with you there, Gabrielle.  There are over a million home invasions–that’s an intruder breaking into a home while the residents are present.  That’s one for every 330 or so people.  The odds aren’t too bad in a given year but… simple statistics (I know math is hard for you, so you’ll just have to trust me on this–we covered this kind of thing the first week of Stat Mech back in college)–over a typical lifetime that comes to about a one in five chance of it happening to a given individual at least once.  Actually, it’s much higher than that because when I crunched the numbers I based on number of people–as though each individual lived in their own separate household.  But most people live in households with more than one person and the chances of it happening are per household, not per person.  I know this is complicated, Gabrielle, but do try to keep up.  I’ve given every benefit of the doubt, used a hard lower limit on the chances.  And it’s still a one in five chance sometime in one’s life.  Maybe not this year.  Maybe not next year.  But a pretty good chance (one in five–cannot repeat that enough) of sometime.

Maybe you’re willing to bet your family’s safety on a one in five chance.  I’m not.  And I don’t appreciate you making that decision for me.

If the topic of protecting your family comes up among people who actually interact and care for children each day, they think of things like using car seats, preventing hormones and dangerous chemicals in food, child-proofing the cleaning supplies, and schoolyard bullying.

I know this is a shock to you, Gabrielle, but we do all that. (I suspect, however, as someone who actually has more than a rudimentary knowledge of science, that I disagree with you on the issue of hormones and dangerous chemicals in food–what actually constitutes “dangerous.”  And thanks to this I now suspect the answer to my question above about if you vaccinate is in the negative.)  And we also take steps about that one in five chance that sometime, someone with ill intent will break into our home while we’re here.

Hundreds and hundreds of you have explained to me that a life insurance policy won’t protect against an armed intruder. I never said it would. The thing you don’t understand: There isn’t going to be an armed intruder. That’s just your paranoia. npr.org/2018/04/13/602…

One million times a year it does happen.  You may be willing to write those people off.  I am not.

NPR is not gifted with particular insight into criminology and justice statistics.  I’ll go with the Department of Justice on this, thank you very much.  Repeating your claim over and over again doesn’t make it so, Gabrielle.

A gun in the home is FAR more likely to kill or maim a household member than it is to protect them. Enjoy your daydreams about armed stand-offs. But that’s all they are. Daydreams.

This is, put simply, a lie.  It was a lie when Kellerman “reported” it (i.e. made it up) in his debunked “study.” It’s a lie today.  There are over one hundred million gun owners in the US, Gabrielle.  That’s households, not individuals.  Even the lowest of lowball estimates of uses of guns in self defense puts them at over 100,000 (National Crime Victimization Survey–extremely lowball because it only counts crime victims.  Things which were stopped before the person became a victim and that were not reported to police were systematically excluded by the very nature of the “study”.  Serious studies report numbers in the half million to three million range.) That’s five times as many as all the murders in the US in a year.  Five.  Times.  The “gun in the home is more likely…” is simply nonsense from beginning to end.  It’s a lie.  I’ll credit you with just being stupid and naively repeating a lie told to you by others, but the claim is a lie.

Update: A shocking number of you are CONVINCED that armed intruders will enter your home at 2 AM. And specially at 2 AM. Is there like an NRA ad about a 2 AM break in? Some meme I missed? Don’t answer. I don’t actually want to know.

It’s called a scenario.  People take a general concept and describe it as though it were an actual event, including details to flesh it out and help others envision the idea more clearly.  2 AM, the “wee hours of the morning” is when most people are deep asleep, when they are at their most vulnerable.  Like when Hillary made her campaign ad about the “2 AM call.”  Same concept.

When you do “design” do you never use concrete examples to use to illustrate some concept you are wanting to include in a design to help others understand and maybe go “I like it.  Let’s do that”?

“And when away his regiment ran, his place was at the for-o
that celebrated, cultivated, underrated nobleman, the Duke of Plaza Toro.”

21 thoughts on “Fisking Another Anti-Gun Nut”