Tomorrow is Thanksgiving.  Today I being a bit of preparation work for the holiday cooking.

So, here’s the menu:

And for my wife, candied sweet potatoes with marshmallows.

The night before, I make the stuffing and the turkey broth (using the giblets) for the gravy.

An additional bit, I cut the meat from the neck bone after making the broth and chop that, the gizzard, and the heart into fine bits which I mix into the gravy.

This has been our traditional Thanksgiving meal for years.  And while I like variety in what I eat, there’s something to be said for tradition as well.

In any case, should you use any of these in your own celebrations, enjoy.

Edit:
And here are the results: 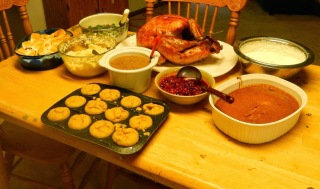 I keep running into people who are insist on only voting for the “perfect” candidate.  “The lesser of two evils is still evil” is a common watchcry and that doing so is simply a somewhat slower slide into tyranny.

The flip side is that voting for the “perfect” (from my perspective–I expect yours would be somewhat different) candidate when that candidate can’t even get the support of 2% of the voters is a quicker slide into tyranny.

I like the metaphor that Neil Gaiman used for his career.  It’s like a mountain in the distance.  And as long as I can keep moving toward that mountain I’ll eventually get there.  Don’t try to do it all at once.  That will fail.

By this chart (let’s see if this works)–

–I’m a pretty much a Paelo-Conservative/Classical Liberal.  Some infrastructure things (roads on the chart) I think are appropriate for government, others not.  On the flip side I’m of mixed feelings about education so between them I figure it’s pretty much a wash and the “Paleo-Conservative” label fits fairly well.  Add in that with “health care” and that things like with infectious diseases other folks actions, or inaction, threaten me and it gets a bit complicated.  But still, Paleo-Conservative is probably pretty close.

But look at where we are now.  We’re so far from that “goal” that the Hubble couldn’t see it.  If I had a true Paleo-Conservative candidate to run for office, it’s extremely unlikely he could win (even in a fair election, never mind when the other side(s) cheats).  And if, by some miracle, he (or she) did win, there is simply no way I’d get a paleo-conservative Congress to go along.

People tell me “compromise doesn’t work.” Actually, the cases they site are excellent examples of how very well it does work.  It’s just that it’s been a weapon used against us.  Conservative/libertarian types are like folk sticking to single shot rifles to “not waste ammo” while the other side has been using repeating rifles and machine guns.  Win small concessions, then use that new position as a springboard to win more.  Repeat until you’re where you want to be.  It’s a tactic that works.  So far, it’s worked for our enemies.  Maybe it’s time for it to work for us.

So look at that mountain.  What can we get that moves us closer to the mountain, even if only a little bit?  Get it.  And then keep the pressure on.

The mills of the gods grind slowly, but exceedingly fine.

I need to move these to the weekends.  With my daughter’s swim team, doing them Monday evening just isn’t working.

I have a major sweet tooth.  This is a problem when on a low carb diet so I’m always experimenting with recipes for sweets that are friendly to my diet.

I’m lucky in that I don’t react poorly to sucralose (brand name Splenda, but I generally use store brands) and don’t find any aftertaste objectionable.

Put 1-2 inches of water in a two quart saucepan.  Place a large metal mixing bowl over the top of it.  This makes a sort of double boiler but with more room than in the typical double boiler.

Add the coconut and sucralose and stir until combined.

While still warm, spread the coconut mixture in an 8X8 baking pan. Refrigurate until firm then cut into 64 pieces (an 8 by 8 grid). Continue to refrigerate until completely hardened they pry out of the pan.  Store refrigerated until ready to eat.  Yummy.

As many folk have heard, SpaceShipTwo was lost in an accident the other day.  One of the pilots was killed, the other severely injured.

Wired Magazine put out an article decrying the loss, condemning Virgin Galactic for risking, and in this case losing, lives in pursuit of a “boondoggle”–providing tourist trips into space for rich people.

How could they miss the point so thoroughly?

A lot of the development in early aviation centered around barnstorming and air races.  The barnstormers were mainly entertainers.  But they got people interested in flight and flying.  How many of those who would go on to become aviators and aviation engineers got bitten by that bug watching somebody in a surplus Jenny doing loops over Old McDonald’s cornfield?  How many got infected by “airplane rides, $5 for five minutes”?

And air races?  Entertainment again.  And it certainly wasn’t bloodless.  Some of those planes (most of them?) were deathtraps.  Yet a lot of the technology that made its way into the fighters of world war ii came right out of those air racers.

In some ways I think it’s a shame that post-war air racing, at least in the so-called “unlimited” class (well, unlimited so long as you’re limited to propellers and piston engines) settled on souped up surplus WWII fighters and not new original designs.  And according to an illustrated history of air racing I read many years ago there was at least one post-war race that featured surplus F-86’s.  Would have been nice if they had continued that but I suspect the problem was money, oh, and the government not letting later airframes loose into civilian hands in numbers enough to make racing them viable. (There  was, before it was lost in an accident, one F-104 in flyable condition in civilian hands.  Who could he race?)

You know, for all Jim Bede’s flaws as an aircraft designer, somebody should have been designing aircraft like the BD-5J and BD-10 (just doing a better job at it).  Now if somebody like the Rutan’s had turned their hand to high performance jet aircraft for the civilian, hobbyist, market….

In any case, pioneering is dangerous, whatever the field.  Those who lose sight of that, and lose the willingness to accept the danger, are doomed to stagnation and ennui.

So keep the dream alive.