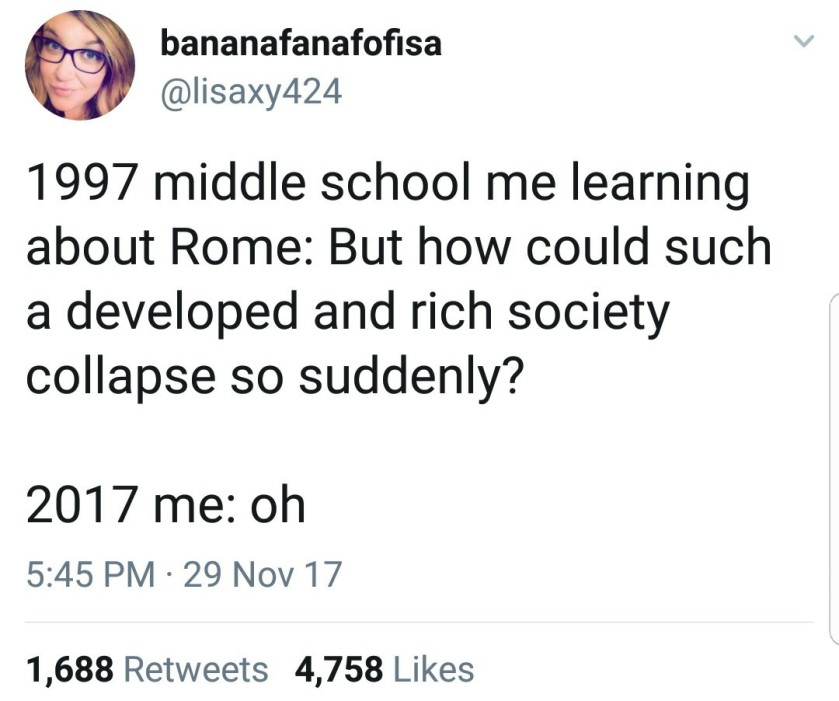 There’s another meme floating around with Cicero complaining about things the then Roman Republic was doing with the tagline “And Rome Fell”.

Consider only the Western Empire at the moment, not considering that “Rome” as an empire continued in the East.  Pressure due to the military threat various Germanic tribes were posing, a threat that was increased because Germanic Leaders included those Roman trained from Rome’s long policy of hiring Germanic troops to defend the borders–easier to pay them than to fight them (the danger of that approach has been immortalized in Kipling’s poem “Dane-Geld“) led to the abandonment of Britain in 406 AD.  One of the main causes of the pressure is Germanic tribes basically fleeing the Huns coming out of Asia.  In 410 AD, the Visigoths penetrated into the Roman Empire and sacked Rome.  Rome recovered partially from that but faced continued pressure from the Germanic tribes:  Franks, Visigoths, and Ostragoths.  Then the Vandals swept through Spain, across North Africa, and then up across the Mediterranean to sack Rome a second time in 455 AD.  And then, finally, Flavius Odoacer, a Roman trained Germanic Leader overthrew the last Western Roman Emperor Romulus in 476 AD.  66 years from the retreat from Britain to the final end of the Western Roman Empire.  Hardly “suddenly.”

This doesn’t even go into the centuries of internal issues that left it weakened to these external threats.

Now, there is some comparison to what was going on then to what is going on now, but I suspect the meme maker would be horrified at the comparison.  A particularly vicious group of “barbarians” had other, not quite so strong barbarians fleeing before them, refugees if you will, who fled until they ran up against the Roman Empire.  Some were accepted into the Roman Empire, hired as auxiliaries and used to defend the Empire.  Other’s just settled in the border provinces.  And the ones brought in learned Roman technology, Roman military tactics, and Roman discipline and then turned that on the Roman Empire overthrowing it to establish their own kingdoms on its carcass.

As for the Cicero bit that gets bandied about (sorry, I don’t have an image to show the exact wording), note those dates involved.  Cicero was assassinated in 43 BC.  The Roman Empire in some form lasted nearly another 1500 years after that.  The Roman Empire lasted longer after Cicero penned those complaints than most historic empires last from founding to fall.