“Private enterprise can never lead a space frontier.  It’s not possible because a space frontier is expensive, it has unknown risks and it has unquantified risks.” Neil deGrasse Tyson, member of two national committees aimed at directing NASA’s “next big thing” made that comment a few years ago.

A few days ago, SpaceX launched their Falcon Heavy booster, carrying Elon Musk’s own Tesla Roadster and a spacesuited mannequin into solar orbit running between that of Earth and beyond Mars.  And he did it for less than anything NASA or any other government agency could do.

What Tyson neglected to consider (being charitable) is that it’s far easier to get a rich man with a vision and the will to pursue that vision than to get a high level government bureaucrat with one.

Many wealthy end up very financially conservative, unwilling to risk their wealth on unproven ventures.  But people don’t become wealthy by doing so.  “Safe” investments don’t pay high returns.  It’s only by being able to take risks that one is able to break out of the mundane to really obtain wealth.

What John Paul Jones said (not his most famous expression, but possibly his most important) in a military context applies here as well:  “He who will not risk cannot win.”

And some of those who do amass great wealth retain the attitude of being willing to risk to obtain wealth after they have obtained it.  This is an attitude that is systematically weeded out of bureaucrats.

Tyson is that second type of bureaucrat, as have been all the top people in NASA and related organizations for quite some time. (In Dyson’s case this involved serving on the Commission on the Future of the US Aerospace Industry and the 2004 “Moon Mars and Beyond” commission.) Iron Law in action.  “Developing the space frontier” was not his goal in any of the posts he held, but promoting NASA and the government bureaucracy itself was.  Actually developing space was purely a secondary issue, something paid lip service in order to further the bureaucracy itself.  This is why he didn’t raise any big fuss at NASA being given a mandate for “Muslim outreach” during the Obama administration.  Space, Muslim outreach?  Whatever, so long as he’s able to further the organization itself.  It was all good with him.

And, of course, part of the furthering of the organization itself is disparaging and undercutting any potential competition for the “turf.”

Of course private enterprise couldn’t do it.  Space was the purview of his organization, his turf.

Well, the results are in.  While SpaceX still has to use NASA facilities (more turf protection–legal restrictions that make private launch facilities prohibitive) Elon has been able to make some of the key initial steps toward opening the space frontier.  The Falcon Heavy is capable of carrying more than twice the payload of the nearest competitor to Low Earth Orbit at a fraction of the cost.  Here’s a comparison of the Falcon Heavy with other historical US launchers: 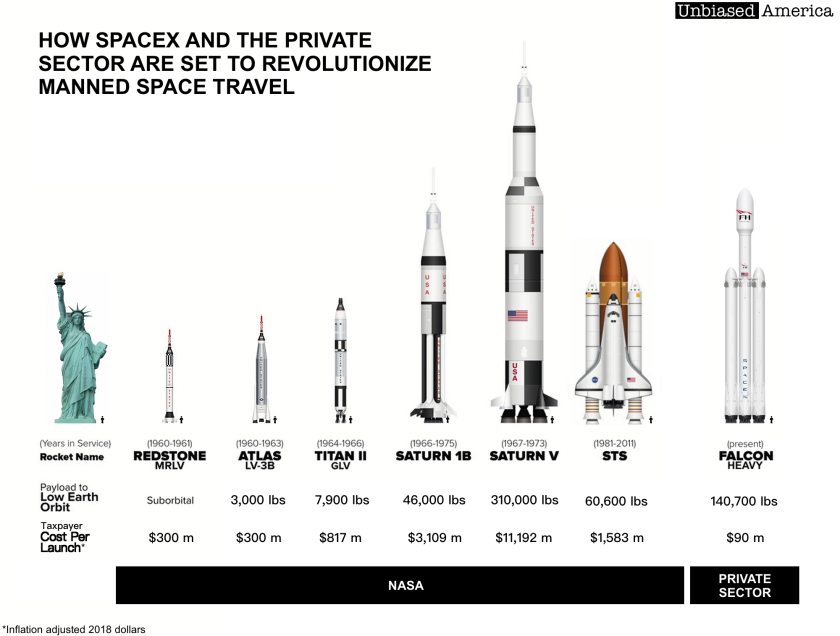 Of current launchers, compare the Ariane 5 carrying 35,000 lbs to LEO at a cost of upwards of $165 million.  The Falcon Heavy carries 4 times as much for just over half the price, almost an order of magnitude cheaper on a weight for weight carried into orbit basis.

And the Falcon Heavy did that while successfully landing its two external boosters, simultaneously, for reuse.  It lost the core, but for a first test flight this was a phenomenal achievement.

As Dick Rutan said after the round-the-world unrefueled flight of the Voyager 1, another unprecedented, private venture. “See what free men can do.”

See what free men can do.

4 thoughts on “Private Enterprise Will Never Open the Space Frontier”