Local store had a sale on center cut beef ribs so I grabbed a bunch to cook out in the charcoal smoker.  I’m not even going to call this an “active writer” recipe because, yeah, a lot of time was required.

Start the smoker and get it heated to about 225.

Mix the onion powder, garlic powder, pepper and rosemary.  Spread it over and rub into the ribs.

Place the ribs in the smoker.  To get them to fit, I placed them diagonally on the grill running from the firebox end to the far end.

Close the smoker and add some apple wood chunks (it’s what I had and I’ve found I like the results) in the fire box to generate some nice smoke.

Check the vents and fire from time to time.  Add charcoal and/or apple wood as needed.  Try to keep the heat at about 225.

Every fifteen minutes or so “rotate” the ribs.  By rotate I mean take out the one closest to the fire box.  Move the second one into the place of the first, and so on until all of them are moved up, then flip the first one over and put it at the end of the row.  This helps keep them cooking in time rather than having the ones closer to the fire done long before the others in the cooler part of the smoker.

Continue until the meat is close to “done”.  I used two basic tests to determine doneness this time.  The first is to insert a toothpick into the meat between the bones.  When it goes in with only minimal force, the meat is almost done.  The other check is the meat cracking when handled during the rotation.  When it starts cracking easily, it’s getting close.

Once the meat is almost done, thickly slather the barbecue sauce onto it.  You’ll want to do two cycles of rotating the meat so both sides get a good coating.  Here’s one rack with a freshly applied coat of sauce:

Okay, my camera shows that upside down.

Once you’ve got the sauce on, you cook farther to let the sauce caramelize and cook into the meat.  It’s truly done when you start worrying bout the racks falling apart in handling.  And here it is after final cooking: 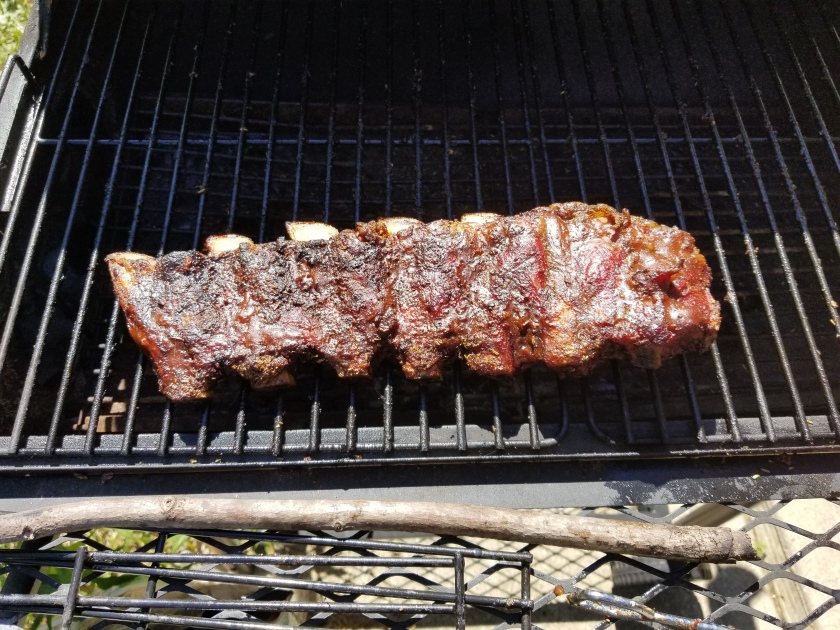 And oh, my, but those were so very good.