I had skipped a week ice skating because of LibertyCon.  And, well, for various reasons I was just having a bad time (personal issues) when I got back on the ice.  Both Friday and Saturday I ended up calling it quits early because I was screwing up badly that it was just not safe.

Sunday, normally class day, class was canceled (the instructors probably just wanted to have the time off for the holiday, which is fine).  Public skating was still open and so I got out to get some practice in.  Much better day then.  Much improvement on the on the one-foot-glides.  Friday and Saturday when I was working one foot glides I kept getting my weight too far forward, catching my toe picks and… Not a pretty sight.  Sunday much better.

Still need to get more comfortable with one foot glides and edges (that’s a one foot glide in a curved path–the skate is tilted slightly to one side or the other so that one of the two edges bites into the ice and the rocker, the front to back curve of the blade, guides you into a curve) before I can get back up to doing crossovers.

Crossovers are the last big skill I used to have way back in the day that I’m not able to do now.  Since I’m doing some things (backward skating and “swizzles”) better than I did before, that will be a major milestone in that I’ll then be better than I ever was before.

Although they didn’t have the learn to skate lessons they did have the Learn to Play Hockey classes that my daughter takes.

Here’s some pictures.  She’s the one in red.  Apparently, they were doing some form of ice soccer. 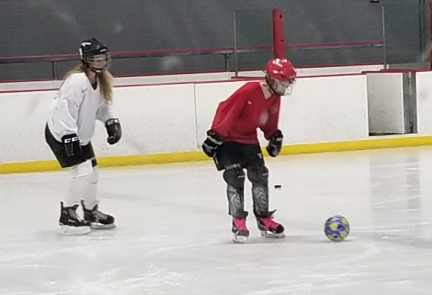 They did other things, of course, during the hour of class time, but this is what I caught pictures of.