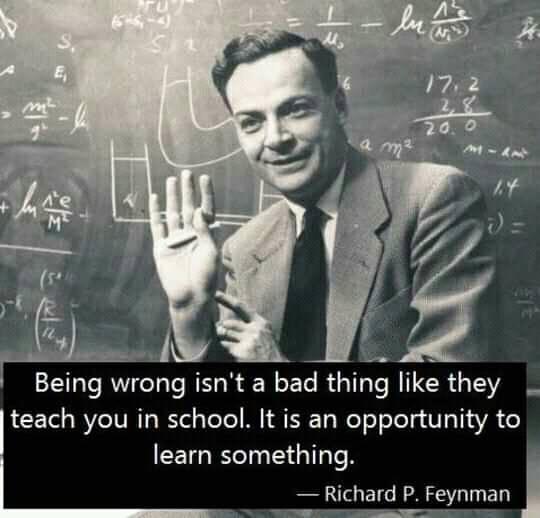 I can say, with pretty good confidence, that nobody guessed (sqrt(2)/cuberoot(97))^e.

There are infinite real numbers between zero and ten, between any two numbers really.  Without some kind of hint, say if I’d said “integer” or “whole numbers” the “correct” answer gets lost in an endless sea of wrong answers.

This isn’t so important in things like “guess the number” but becomes vital in trying to figure out the world around us.  In science, this is why a key element is testing our theories.  We look for what must happen, and what cannot happen, if our ideas are right and then we look.  And if something our theory says must happen does not, or something it says cannot happen does, why then we know our theory is wrong and we go back to try to figure out a better idea.

That feedback is essential in the effort of trying to get closer to “right” than not.  The mismatch between our ideas and what happens in reality is a guidepost to keep from going astray.

The problem comes when people insulate themselves from feedback.  You have an idea, you expect a certain result.  Then, when you try out the idea something else happens, often in direct opposition to what one set out to do with the idea.  Instead of re-examining the idea and considering that maybe it was wrong, you instead find, or invent, reasons why the idea was really correct and it’s the results that are “wrong” in some way.

We saw this happen in the sixties and onward in the criminal justice system.  Folk started talking more about “rehabilitation” rather than “punishment” and about addressing the “root causes” of crime.  And so penalties started being reduced, in practice if not in law.  More and more extensions of “rights” were “discovered” by the courts in the interest of “fairness” so that the least clever criminal could be as likely to evade punishment as more clever or connected criminals.  And, in the meantime, millions, then billions, then trillions of dollars were poured into programs intended to alleviate poverty, the key “root cause” of crime (It Says HereTM).

And yet crime persisted in going up not just for years but for decades.

Excuses?  There were all kinds of excuses. “Less crime is happening but more of it is being reported.” (Except murder, where you usually have a dead body, was going up right along with everything else.  There isn’t exactly a lot of room for their to be that much previous “unreported murder”.  Some, yes, but not enough to explain it.) “We didn’t do enough.” (As Robert Heinlein once said: “You can make water flow uphill if you pray hard enough.  How hard?  Hard enough to make water flow uphill.”) And a perennial favorite. “It would have been even worse without our changes.” (Notice that no evidence is required.  It’s just assumed.)

Nowhere in that is the question of whether maybe their original ideas were right examined.  Nowhere do they say “Maybe we were wrong and we need to try something else instead.”

They have insulated themselves from all feedback.  The excuses are so general, so sweeping, that anything that happens at all can be explained away.  There is no possible way, so long as those excuses are accepted, to differentiate between their being wrong and their being right.  It’s the falsifiability problem again.  They are completely insulated from any feedback that might challenge their beloved ideas.

Rudyard Kipling wrote a collection of stories called “just-so” stories.  These were tales that gave fanciful explanations for how various things came about:  How the camel got his hump, how the leopard got his spots, and so forth.

Well, that’s what we’ve got today:  politics by “just-so” story.

Edit: That Feynman pic represents this piece much better than the previous.

3 thoughts on “Insulation from Feedback.”