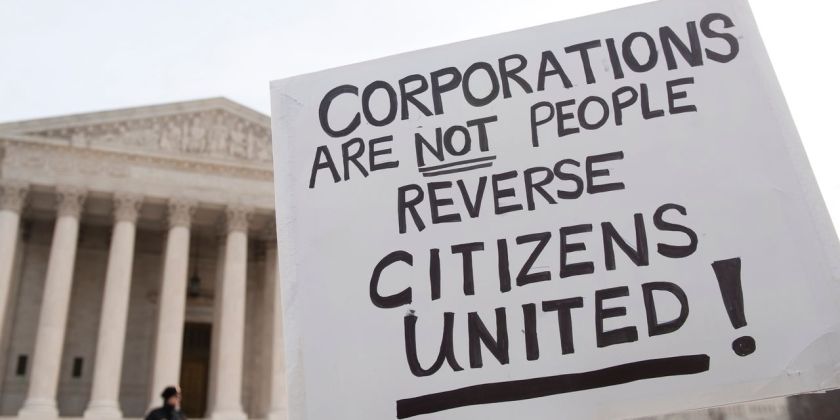 And people are still frothing at the mouth about it. (Actually an update on a post from my old LiveJournal blog–but with enough new material that I’m not calling it a “Blast from the Past”.)

At what point does the First Amendment stop applying and why? Why at all, and why that point?

People engage in speech, not organizations.  And organizations are made of people who do not lose their rights when organized in particular ways.  When you ban an organization from engaging in political speech, including the speech of buying ad space and the like, you aren’t stopping some “faceless entity”, but the people of that organization.

So, unlike the graphic at the start of this claims, corporations are people.  There are people, put in place by people, to make decisions on how the resources, provided by people, will be used.  It’s people all the way down.

I would say the same thing (and do, in fact) if instead of “corporations” the argument was about unions.  However, strangely enough, most of those who decry “corporate money” involved in elections tend to have no problem with unions and other organizations (that are just as far down the “list” above as corporations) and their money–so long as those organizations support ends that they approve.  Let the organization be in opposition to their views (the NRA for instance) and nope, that organizational money needs to be gotten out, out, out of politics.

The problem, as usual, is not that the organizations are spending money on politics.  It’s that government is so powerful, and so intrusive, that the influence that money can buy is too valuable to ignore.  When the decisions of some government bureaucrat, who will pay no price if the decision is wrong, can decide the fate of your entire industry it would be foolishness in the extreme not to pay however much is required to influence that decision.  And laws to restrict that spending simply drive it underground and mostly increase the cost of that influence restricting it to a smaller and smaller pool of wealthier influencers.

It may seem paradoxical, but the answer is to reduce the restrictions on campaign finance.  Make it open.  This will increase the number of people and organizations with different viewpoints who are able to be heard and therefore reducing the influence of any one particular special interest.

The other solution is simply to reduce the power and intrusiveness of government.  Reduce the value that influence over government has and people and organizations will simply be less willing to spend as much on that influence.

It’s called “freedom”, and it’s worth a try.

2 thoughts on “Citizen’s United at Fifteen”