“Oh, no!” This person asserts. “Even 1-3% is too much!” (It actually appears to be much lower than that but…leave that aside for the moment. 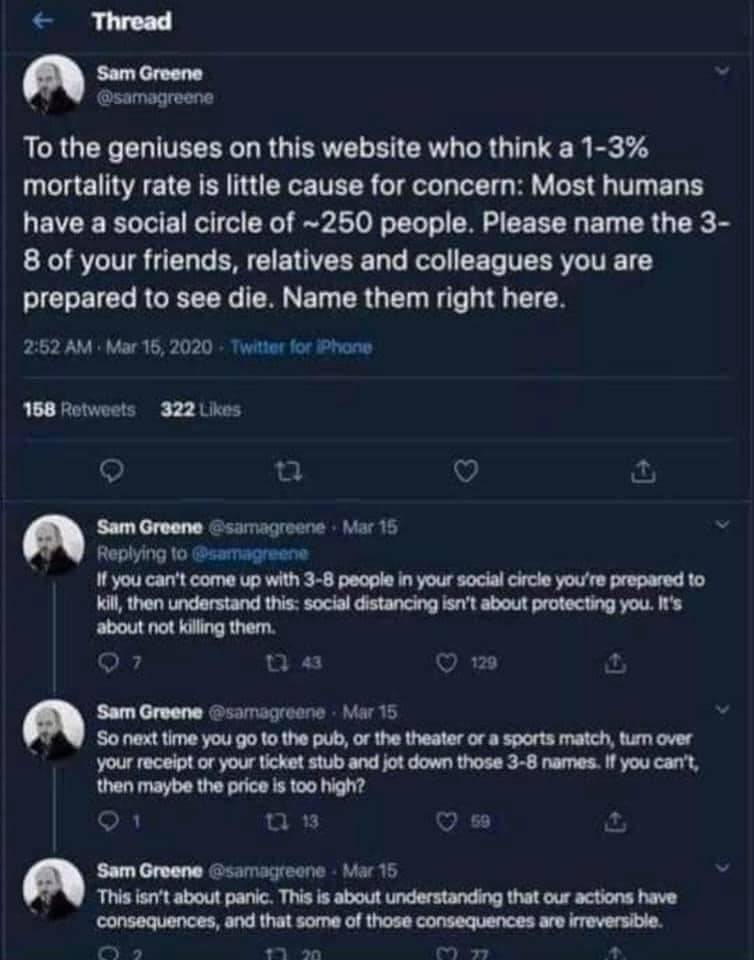 But you know what else kills people, particularly people on the margins (like people over 80 with significant co-morbidities)? A faltering, let alone tanked, economy kills people.

There are numerous ways in which tanking an economy leads to more deaths. The thing is, those deaths are mostly “on the margins”–a person who’s already depressive might find being unemployed just that little bit extra to push him over the edge to “suicidal.” A person with anger issues might find the added frustrations of a bad economy just that bit extra to cause him to turn to violence. And people at the edges in terms of diet, nutrition, or health might find the lesser availability of things they need as just enough to make the difference between survival and death. There are all these boundary cases scattered in hundreds to thousands of different aspects of the economy, where a bit of change means the difference for some of them between living and dying. But since it was already close it just looks like the same kind of situations where folk die even in a “good” economy. Even in an economy that’s good people commit suicide. In an economy that’s good people die from health issues related to diet. In an economy that’s good people have frustrations that trigger anger issues which leads to them turning to violence. And so, the damage done, the deaths resulting from a faltering economy, go unremarked because they aren’t one big noticeable block. They’re thousands of little blocks, a few here, a slight increase there, unremarked and unnoticed except by their friends and loved ones.

But they are no less real for being unseen.

There are no ultimate solutions. There are only trade-offs. Your attempt to stop deaths one way, if it tanks the economy, simply causes more deaths elsewhere.

Now, politically, that’s actually an easy choice. “Unseen” may not make the deaths less real, but it does make them less likely to affect elections. If the voters don’t see them, but do see the folk being “saved” (or at least claimed to be saved) by the “actions” taken, well, people will generally vote what they see and not what they don’t.

And that’s why the more I study economics and related politics, the more “goth” I become. Might as well learn to appreciate the dark because it’s not going away.

3 thoughts on “Still Panicking over Winnie the Flu.”