I am not a fan of country music.  Nothing specific wrong with it, just not my cup of tea.  One thing I will give the genre, though, a number of artists have put out some very good patriotic songs.

So, some time back I went on a quest looking for some rock or metal groups doing patriotic stuff.  Some folk over in another forum pointed me at a group called Madison Rising.  My first introduction was their rock version of The Star Spangled Banner.  Now, I’ve had some people criticize it as just another case of people trying to “personalize” the national anthem but I take a different view which I illustrate with two points:

If it gets people who otherwise wouldn’t to listen to the song and pay attention to it, that’s a win in my book.

But it’s another of their songs that I want to talk about today:  “Before the hyphens came.”

So here it is:

My 5 A.M. alarm goes off, I’m rolling out of bed
I turn the TV on, to wake up and clear my head
I catch the news, just in time to view another stirring of the pot
Talks of in-equality, what people need, and forgetting what they’ve got
But in these times of opposition, the prejudice runs deep
Dividing us by heritage is all they ever preach
Chorus:
They tell us that they really care
But to them it’s just a game
‘Cause we were all Americans
before the hyphens came
When people cared ‘bout who you were
and less about your name
‘Cause we were all Americans
Before the hyphens came
Somewhere down along the line, someone had the great idea
to divide us up by heritage, and profit from that fear
But growing up a while back, before these racial trends
Whether immigrant, or white or black, we just called each other friends
And if we spoke an extra language, it was just another way
To pledge allegiance to the flag, God bless the USA
Chorus
So don’t listen to those talking heads
There’s one thing they forgot
That this Sweet Land of Liberty
Should be one big Melting Pot
So take away the hyphens
We’ll all be the same
No more lines betweens us
Together we’ll remain
Forget about your color
Forget about your name
No more lines between us
Cause we are all the same
Chorus

Unfortunately, the nostalgia of the song describes an America that never was.  There was never a time where it was generally true that “we were all Americans, before the hyphens came.”

Even so, there is a big difference between now and then.  Back then, they may not have achieved the ideal.  Irish may have hated Italian, Protestant might have hated Catholic.  In a great irony many of the “whites” hated the “indians” (who were here first).  And everyone hated the Mormons.  But “That this Sweet Land of Liberty Should be one big Melting Pot” was the ideal.  It was the goal we strove for.  While individuals may have wallowed in hatred of others, as a nation we recognized that the divisions between individuals were wrong and weakened us.  As Benjamin Franklin put it in his famous cartoon:  Unite or Die: 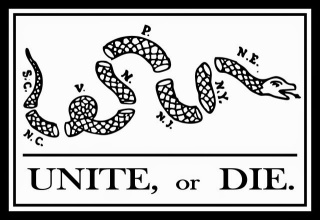 And people who came to the US came to be Americans.  Becoming a part of the greater culture was a priority.  And when they became part of our greater culture, the brought a little of their own.  To a very great extent, it was true that “This sweet land of Liberty, should be one big melting pot.”
Nowadays, however, that’s changed.  Assimilation is frowned upon.  People come to the US for economic or other advantage with no intention of becoming “Americans” in any cultural sense.  Oh, sure, there’ve always been some, but there’s been a sea change in the numbers and assimilation is actively discouraged.  And reverse assimiliation, if people of “American Culture” adopt things from others it’s called “cultural appropriation” and people get up in arms about it.
All of that is ridiculous and discards everything that makes America America.  Cultural Appropriation?  That is our culture, to take the best of what we see around us and make it our own.  And it starts with the American people deciding, first and foremost, to be American and not some hyphen.
And so I leave with this musical interlude: