When I went through Basic Training one thing that was explained to us was that any kind of partisan political activity while in uniform was absolutely forbidden.  No taking opinion polls, no campaigning for candidates, or any other kind of overt political activity that implies, or appears to imply official sponsorship of one side or another of a political issue.

That includes not showing up at political rallies wearing a uniform unless one has official duties that require one to be present (like, say, the President’s Marine Corps guard detail).

That was 35 years ago.  The basic policy has not changed.

From the Army’s web site:

That’s not to imply, however, that military members and civilian employees can’t participate in politics. In fact, DOD has a longstanding policy of encouraging members to carry out the obligations of citizenship, officials said. DOD encourages its military and civilian members to register to vote and vote as they choose, they said. Both groups can sign nominating petitions for candidates and express their personal opinions about candidates and issues.

However, officials emphasized, they can do so only if they don’t act as, or aren’t perceived as, representatives of the armed forces in carrying out these activities.

Beyond that, the list of do’s and dont’s differs depending on whether the employee is a member of the armed forces, a career civil service employee, a political appointee or a member of the career Senior Executive Service, officials said.

Military members, for example, may attend political meetings or rallies only as spectators and not in uniform. They’re not permitted to make public political speeches, serve in any official capacity in partisan groups or participate in partisan political campaigns or conventions.

They also are barred from engaging in any political activities while in uniform.

Then there’s this asshat: 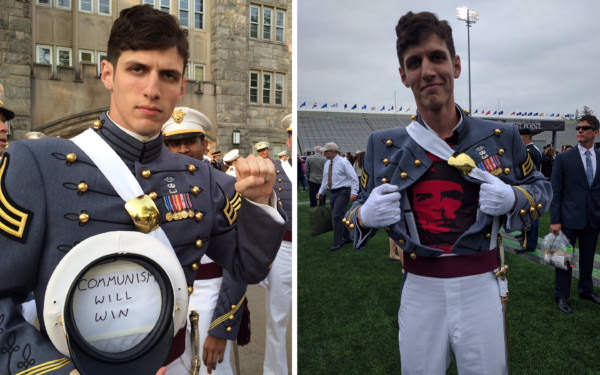 While I may disagree with his twitter posts under the handle “Commie Bebop”, those, at least were done at one remove from being “in uniform”.  One might question whether a series of posts/tweets on the same topic might constitute “public political speeches” but as a First Amendment near-absolutist, I’m willing to give him the benefit of the doubt there.  It’s not in uniform and doesn’t even give the appearance of implying any kind of official sanction.  His beliefs?  Well, I doubt they are compatible with honorably serving his commission but, again, I would be willing to give him the benefit of the doubt until he actually demonstrated through his actions that his beliefs are incompatible with honorable service.

But in uniform at a military (including military academy) event?  That’s a clear violation.  Indeed, that the very demonstration that his beliefs are incompatible with honorable service.  He needs to be court martialed and discharged with something other than honorable (I won’t hold out for a dishonorable–I want him gone and without the benefits of those who serve honorably more than I want sanctions beyond that.  I won’t even hold out for a prison sentence although one is applicable–let’s not make him more of a martyr for the anti-American Left to celebrate).

Of course the usual suspects will bleat about “First Amendment” and “Right of Conscience” (Hey, he’s not being asked to bake a cake).  Those who have served in the military know that Freedom of Speech is limited.  Try saying “Our commander is an utter moron, unfit to lead a marine to a whorehouse, let alone a company into battle” and see where that gets you. (You folk currently serving know that would be a bad idea, right?)

This crosses the line so this disgrace to the Uniform needs to go.  He can go with public panapoly or he can softly and silently vanish away, but he needs to be gone.

20 thoughts on “Politics in Uniform”