I don’t usually do back-to-back blasts from the past, but a post on a friend’s FB page brought this subject up:

That is a refrain I hear all the time.  Automation, will take over people’s jobs and put them out of work and we’ll end up with endless numbers of people for whom there are no jobs.

But is that really how it works? 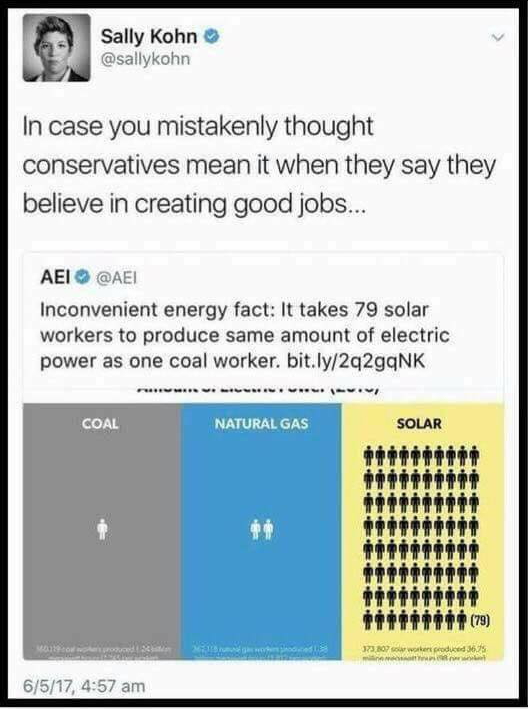 She is clearly advocating here a means of producing energy that requires 40-80 times as much labor to produce a given amount of “product” (in this case energy).  Exactly the opposite of what automation does.

Automation, the use of robots, produces more with less labor than was possible before.  That means we don’t need as many people to fill the need for whatever we’re producing.  And that means the “excess” people are out of work, right?

Sorry, but that’s not how it has ever worked except in the very shortest of terms.

Producing more with less labor has been the spur for economic growth since before recorded history began.

In early agriculture, farmers planted crops by poking a hole in the ground with a stick, dropping seeds into the hole, then closing it by stepping on it.  One person could raise enough food that way to feed him or herself with very little surplus.  Just about the entire population had to be full-time farmers.

Along the way somebody discovered that if you dragged the stick along the ground you could create a furrow, preparing a field for seed in less time.  This rapidly turned into the scratch plow pulled at first by other people and later by animals.  One person could keep more land in cultivation, meaning you needed fewer people to produce the food for your population meaning more people were freed up for other activities.  People could become artisans, and craftsmen–specializing in those activities and not simply performing them as a sideline between stints in the fields.

It is no coincidence that the flourishing of the ancient civilizations of Mesopotamia, the Nile valley, and the Levant arose following the invention of the plow–other things too such as the potter’s wheel, which also allowed fewer people to produce the pots and urns that people needed.

So it has been throughout history.  Western (i.e. European) civilization took off when extensive use of water mills, and later steam power, took the place of muscle power for industry.

One of the steps along the way, an early example of automation, the use of punch-card controlled looms for making textiles, led to actual protests.  A movement started by a probably mythical individual by the name of Ned Ludd, protested the new looms, claiming that it would put weavers out of work.  The protests involved both violence and sabotage.

Of course, the use of the new looms proceeded apace and, contrary to the fears, the economic growth more than absorbed any weavers displaced by the automation process.  Nor was the displacement as bad as expected because by producing more textiles more cheaply, international trade increased the quantity demanded.

Interestingly enough, a number of former third-world nations (even before the term “third world” was coined) have used textiles as an entry point in bootstrapping an industrial and manufacturing economy.

And so it has gone ever since.  Machine tools.  Assembly lines.  Railroads.  Modern shipping (compare the crew to cargo ratio of a modern container ship to an old merchant sailing ship).  Industrial robots of increasing sophistication.  And now robots that are poised to take your order and make your food in fast food establishments.  All of them ways to get the same job done with less human effort.  The latest round is no different from any of the previous ones.

What all of them do is to free up people to do other things.  This is the core of economic growth and we all benefit from it.

If you don’t believe that, I invite you to try to live as that prehistoric farmer family did–feeding yourself by poking holes in the ground with a stick (no cheating by dragging the stick to create a furrow).

2 thoughts on ““Robots are Going to Put US Out of Work: A Blast from the Past”