…while you still know everything.”

That was something my mother said to me when I’d tell her how I thought the world ought to be.  And it was old when her mother told it to her.

It seems there comes a certain time in a young person’s life when their vision starts to expand beyond their immediate home and they start looking at the larger world.  And they bring concepts of “fair” and “right” which, while well meaning, lack the, shall we say, depth that comes with experience?

And they are so certain that they know exactly what would make the world right if people would just… Only they have no idea of the costs (not just the old economic bugaboo of “allocation of scarce resources that have alternative uses” but the human costs) of their “just” and what second and third order consequences would be (what Thomas Sowell called a failure of “thinking beyond stage one.”)

But they are so certain of their rightness.  And their limited knowledge of the world convinces them that they are the wave of the future and their victory is assured, at the very least after those old fuddy duddies with their outdated ideas die off.

Case in point there was this tweet by David Hogg: 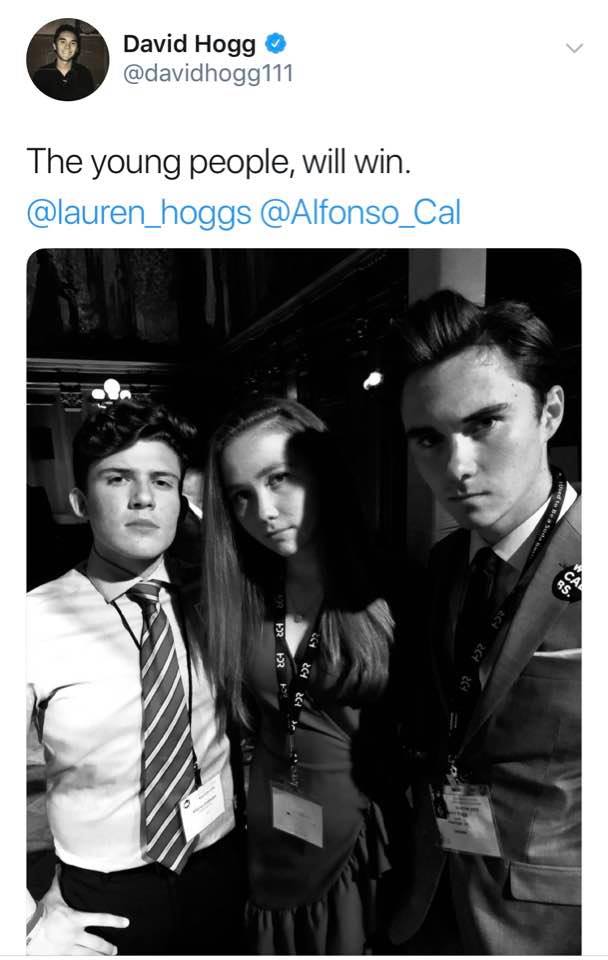 Look, David.  Your fifteen minutes is up.  Give it a rest already.  And your attempt to look badass?  You just look constipated.  Also, you’re going to Harvard.  I know that your admission was purely a virtue signal on their part, but come on, I would expect a better understanding of punctuation from someone going to what has been one of the most prestigious universities in the country.  You’re making them look bad.  But the real issue is your claim of certainty of victory. (Now, I’m giving you the benefit of the doubt here.  Your actions do look a lot like instead of any well-meaning but misguided through a lack of experience and understanding of the larger world stance, you are just riding the issue for your own benefit–after all it got you into a far better college than you could hope to attend on your own merits.)

The first thing you need to remember is that not all young people think like you.  And of those that do, many will shed their ideological blinkers and start looking beyond what they want to be to the realities of what is.  In short, many will outgrow your certainty.

But, if none of that moves you to think beyond your own narrow views I can at least offer an anthem for you, from others that also felt that they, the younger generation, would win.

Things like “the future belongs to us” and “We’re on the right side of history” have been said before.  And if you actually knew and understood history, rather than the pre-digested pap that was spoon fed to you in school, you’d know just how ominous such sentences can be.

In the meantime, you’d better write that book while you still know everything.