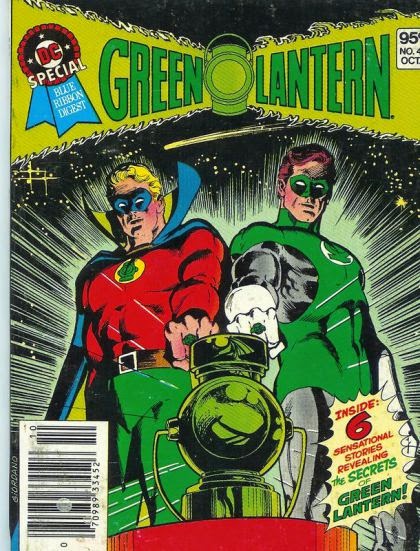 Many years ago I was a big comics fan.  Not a collect comics and keep them carefully in mylar bags to preserve them in mint condition, type fan but a grab everything I could get my hands on and read it until it falls apart type fan.

I loved comic books.  I loved heroes.  People who’ve read some of my other posts should understand that about me.  People with amazing powers who use those powers of their own free will, nobody outside forcing them to do it, to help others.  Awesome.  Can’t get enough of it. (And if some get paid for it–I’m looking at you Heroes for Hire–that’s fine too.  Just so long as they’re helping people along the way.)

One of those heroes was Green Lantern.  The Green Lantern of my childhood was Hal Jordan.  And every time he had to charge his Power Ring (every 24 hours), he said his oath:

In brightest day, in blackest night, no evil shall escape my sight.  Let those who worship evil’s might beware my power, Green Lantern’s light!

And so I went quite a few years.  I encountered other Lanterns from other space sectors (these Green Lantern’s were kind of like space cops, each with a sector of space to patrol).  I saw that the other Lanterns had their own oaths.  Okay, fair enough.

But then, some years later I encountered the Golden Age Green Lantern, Alan Scott.  His ring was quite different.  Where Hal’s was the product of alien super-science, Alan’s was from an ancient magic lantern prophesied to flare three times, once for death, once for life, and once for power.  We get the tale of the first two flares and the third flare is where Alan Scott gets his power.  He makes his ring from a part of the lantern (I know that doesn’t make sense.  It was the 40’s.  Just go with it.) and becomes the Green Lantern.  Instead of being vulnerable to the color yellow (in the sense that it can’t directly affect anything of that color), his ring is vulnerable to “natural things” (likewise) as opposed to manufactured which soon morphs into “doesn’t affect wood.”

His oath, too, was different.

I shall shed my light over dark evil, for dark things cannot stand the light.  The light of the Green Lantern.

That rocked.  For that oath alone I prefer the Alan Scott Green Lantern to the Hal Jordan one.

Hal’s oath is about power.  I don’t disparage power.  It allows one to do great things.  But Alan’s?  Alan’s is not about power.  It’s about being a light, a beacon.  Light that shines forth.  Evil cowers from it.  Good is drawn to it.

Power can be countered with power, but light?  Darkness can only retreat from it.  It can try to extinguish the light but it cannot defeat it.  As the metaphor goes, a single candle defeats the deepest darkness.

Not all of us have power, but all of us can be a light that shines in the world, the light of freedom, of courage, of ideals soaring high.

Be like Alan Scott, let your light shine forth.