Some folk at the extreme end of the Libertarian spectrum insist that government is bad, pure and simple, that anything, absolutely anything, government can do that’s the least bit beneficial, private voluntary transactions can do better.  Here’s an example of the thinking: 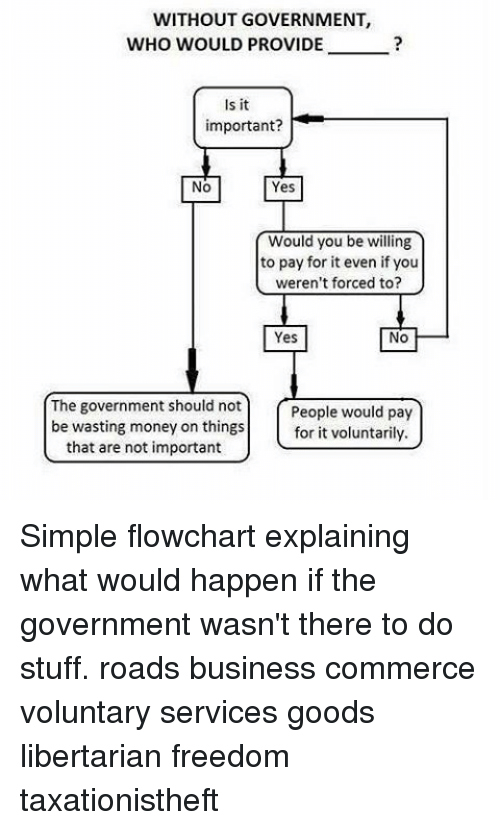 This position, however, drastically oversimplifies the matter.  It works well when the people who receive benefits and pay costs are direct parties to a transaction.  However, that’s not always the case.  People outside the transaction are sometimes also involved–the transaction between two individuals can involve things that impose a cost on others, or produce benefit beyond the folk engaged in the transaction.  In either case, they distort the cost of the transaction.  Milton Friedman called these “neighborhood effects”.  Thomas Sowell and others more recently use the terms “External costs” and “External benefits.”

A classic example is a business dumping waste into a stream or river.  On the one hand, there is no such thing as “pure water” in nature.  Even “unspoiled” rivers high in the mountains contain the waste of the deer and bear that live there.  It’s all about the amount.  “The poison” as they say “is in the dose.” “More pure” has a value to it, just as other things we desire have values to them.  And just like with those other things we value, we would be willing to part with some of it for something else we value sufficiently.

If there were just two people involved, a stream that ran only from the dumper to the dumpee, they could come to a mutual arrangement.  The dumper would be allowed to dump X amount of waste in return for giving the dumpee Y to compensate for the reduced purity of the water.

The problem is we don’t have only two.  When one party dumps into a stream it affects the water purity for everyone downstream.  It becomes difficult to determine who is affected how much and to arrange individual transactions to compensate for the lost value for each affected individual.  When you have multiple parties doing the dumping as well as multiple parties downstream and parties on both the receiving and the delivering end of the dumping it becomes simply impossible.

In addition to external costs, there can also be external benefits.  Thomas Sowell uses the example of mud flaps on cars.  By reducing the “spray” from a car’s tires onto vehicles following them those other vehicles have the benefit of improved visibility.  They can see better because they are not getting as much rain, snow, and mud thrown onto their windshields.  However, each driver receives no benefit from mud flaps on his own vehicle, only a benefit from the mud flaps on the vehicle ahead.

Another example of an external benefit is education.  I benefit from other people being well educated, whether it is the surgeon who removes my malfunctioning gall bladder or the engineer who designed the brakes on the car I drive.  There are endless benefits I receive that are hard to track down to the specific parties to the transaction.  Yes, the specific surgery or the specific car purchase is an individual voluntary transaction, well handled by the market (albeit the former distorted by both regulation and insurance systems), the education of doctors and engineers, let alone the foundational education before they even sort into doctors, engineers, scientists, teachers, lawyers, and so on is much less so.

The case of externals costs/benefits is a situation which “the market”, the system of voluntary transactions, does not handle well.

Another class of situations that presents a particularly difficult challenge to a system of strictly voluntary transactions is when the benefits are to a group and cannot be divided out to particular individuals.  National defense is the classic example here.  Everyone in a society can agree that defending that society from foreign aggression has value but everyone gets that value regardless of whether they, in particular, pay for it.  The incentive, then is for each individual to rely on others to pay for the defense while they individually reap the reward while paying nothing.  Not everybody will take such a cynical approach.  Some will pay because they recognize that someone must and, thus, it is their duty to do so.  But those duty-driven individuals will pay more because others, not so driven, will take the benefit without making the voluntary (remember, we are talking about a system of voluntary exchanges here).

So, it soon becomes apparent that some means needs to be put into place to deal with external costs and benefits and non-divisible benefits.  Since this won’t be strictly voluntary transactions it will, by definition, be some form of government.

The problem is that just because in some circumstances government can handle a matter better than can the market, does not mean that it will handle it better.  Once the government program is in place, its own constraints and incentives will take over.  The iron law of bureaucracy will soon come into play and the various government organizations will soon become more interested in expanding their own power and influence and less over the problem they were created to deal with.

However well intentioned any government program for dealing with external costs/benefits or indivisible benefits, the programs will grow and expand to the point where the costs exceed the benefits.  Thus, while the elimination of government entirely is feasible, the default should always be toward pruning.  And when looking at the supposed benefits of a government program one needs to be highly cognizant of the fact that the costs very often exceed the benefits (meaning the resources being spent could be better spent elesewhere) or that in most cases the market, voluntary transactions between individuals and self-organized groups of individuals, really does handle things better.

2 thoughts on “The Role of Government”