The late Dr. Jerry Pournelle described what he called “The Iron Law of Bureaucracy” as follows:

The world does not appear to present any counter-examples to the iron law.  New and vigorous bureaucracies might, at first, vigorously pursue the goals of the bureaucracy but sooner or later (usually sooner) the Iron Law takes over and the bureaucracy becomes its own reason for being.

A useful marker is to look at the size and cost of the bureaucracy with no commensurate increase in results.

Take, as an example, education in the United States.  Spending (after adjusting for inflation) on each student over the course of their schooling from Kindergarten through High School  has more than tripled since 1970.  Yet despite this massive increase in spending, test scores in basic subjects like math, reading, and science have not improved: 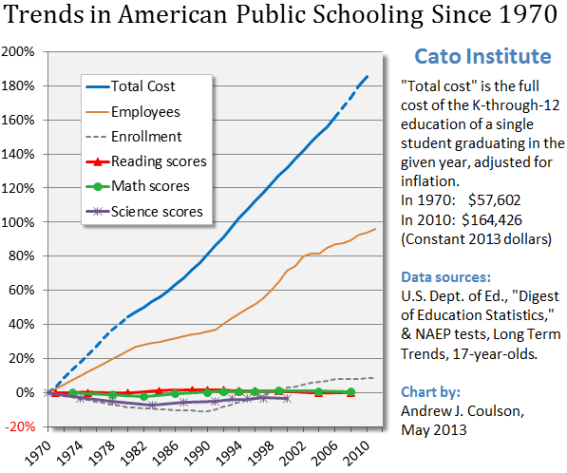 We see the same thing in health care.  In this case the extraordinary grown of administration compared with the very modest growth in number of physicians:

Time and again we see the same thing, wherever there’s a bureaucracy the iron law takes over and those in charge of the bureaucracy become those less interested in the goals for which the organization was created, and more those of the organization itself.  Education, Health Care, Public Safety, The Environment, anything.

This is not to say that everyone in those organizations cares only about the bureaucracy and its size, power, and influence.  The Iron Law does not say that the first sort of bureaucrat goes away.  Those dedicated to the purpose of the organization–the teachers who care about the kids’ learning, doctors working hard to promote the health of their patients, police for whom “to serve and protect” is not just an empty slogan, and so on–still exist.  They’re just not the ones “driving the bus” as it were.

Unfortunately, the Iron Law is the Iron Law because their is no cure, not completely.  Most attempts to “fix” the Iron Law fail because, the people called on to implement those changes in the first place are bureaucrats of the second type.  And the implementation simply becomes another opportunity to enforce the Iron Law.

There are a few things that can mitigate the effect of the Iron Law.

One way to alleviate the problem of the Iron Law is to tie the power and influence of the bureaucracy to its success at meeting its goals.  One of the most effective ways to do this is through the market.  In businesses that have to compete with others, if the company (which is, itself, a bureaucratic organization) does not produce products and services that meet the wants of the customers those customers will go elsewhere.  Thus bureaucrat of first or second type matters little here since both types will have to meet the goals of the bureaucracy if the bureaucracy itself is to thrive.

While far more things than many will credit can be handled that way, not all things for which bureaucracies are created, even legitimately, are amenable to that treatment.  In those cases, there remain a couple of things that can be done to minimize the problem of the Iron Law.

The first of these alternate methods is to keep the bureaucracy small and local.  The tendency of any bureaucracy is to grow, but if you can restrict that growth, you can minimize its appeal to the second class of bureaucrat and delay the problem where the bureaucracy becomes its own reason for being.

The second is to simply reset the entire process periodically–sweep the bureaucracy clean from time to time and start over.  This is what the “spoils” system of the past did, where the new administration essentially replaced everyone top to bottom.  While that system certainly had its problems, I am not certain that the problems of an entrenched bureaucracy, as developed in the Iron Law, are not worse.

So, while the Iron Law may be iron indeed, even iron will bend if you hammer it enough.

5 thoughts on “The Problem of Bureaucracy”