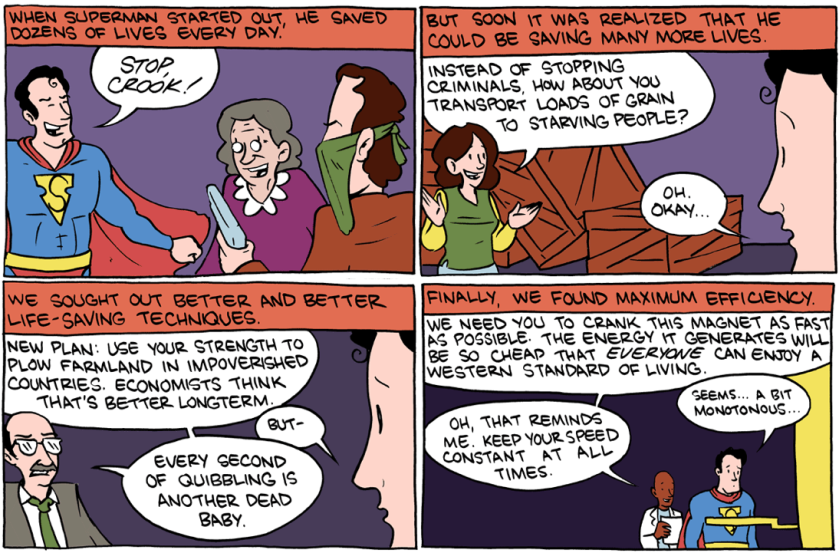 A perennial issue in politics on economic subjects is the idea of “saving jobs.” We need, we are told, to protect American jobs.  And most people nod their heads and agree.  After all, it’s hard on people losing their jobs to foreign competition or to folk coming in who are willing to work for less.  Disagreeing is considered heartless.

Well, at the risk of being considered heartless I’m going to say it up front:  not all jobs should be saved nor should they guarantee a certain level of remuneration if lower cost alternatives become available.

Part of this is our old friend the Fallacy of Composition, the belief that if something is good for a part (the industry in which jobs are saved) that it must be good for the whole (the economy in general) as well.  The example Thomas Sowell likes to use is being a spectator at a sporting event.  You can see better if you stand up.  But that doesn’t mean that everyone will see better if everyone stands up.  When you stand up, yes, you see better.  But in so doing you’re blocking someone else’s view.  And when everybody does it the blocking cancels out the improved views.  It’s all about the same, just…everybody’s now on their feet instead of seated.

Change, and that includes beneficial change such as economic growth, means displacement of some.  Jobs are lost in one sector and if looked at in isolation that’s a bad thing.  But it’s balanced by jobs being created in other sectors.  Consider the following comparison of jobs in the American economy in 1910 vs 2015 (a 105 year interval):

Farm labor is a little harder to figure since family members generally work without being counted as “employees”.  To give an idea, though, in 1905 about 31 million of the nation’s 76 and a fraction million people lived on farms.  In recent years, something like 5 million of America’s more than 300 million people work in agriculture.

Many jobs in many sectors have been “lost” over the years.  that does not mean that we need to go back to those earlier times and bring those specific jobs back.  The jobs were “lost” as part of the process of economic growth.

Imagine if we’d “protected” farm jobs to the extent that the same fraction of people were working farms now as were in 1905.  Nearly half the country would be working farms.  But that means that far fewer people would be available to make cars, program computers, operate and manage computer networks, provide online shopping services, build and install air conditioners, perform medical research, and the million and one other things that makes life more comfortable, secure, and generally pleasant in 2019 than it was in 1910.

There is, however, one way in which jobs can be “protected” that is valid and that does not fall into the fallacy of composition:  reducing the tax and regulatory burden on employers.  When I was a teen there was a plan outlined by some of our local politicians to help certain industries remain competitive by giving them tax breaks and reduce some of the costly regulations which render it more difficult for businesses to operate and grow.  These costs make it more difficult to hire people (since money that could go into attractive salaries is being bled away by taxes and cost of regulatory compliance).  They makes the business less profitable and thus less appealing to investors.  Businesses located elsewhere not facing those costs (in other States with more favorable tax structures or even overseas) could outcompete them.  By giving these “disadvantaged firms” a break, they could remain competitive providing employment and benefiting the economy.

Even as a teen I saw the mistake in that.

And since cutting taxes on business is a good thing if you want more business (and the jobs and goods and services in the economy that go with it), then why not go ahead and cut taxes on all the businesses and “save” even more jobs as the economy booms.  And if you reduce the regulatory burden as well, not only do you reduce the compliance cost of the businesses, you also can get rid of much of the enforcement costs on the government side, thereby reducing the need for tax revenue to pay for it, and freeing up those people to do economically productive work.

It’s a win for everybody.