We left of last time with the valve cover not quite off.  I had to look into what I was missing.

I found that there were two bolts I’d missed.

One was on the back end of the valve cover on the left-hand side.  Space was very tight.  I couldn’t get in with a socket and ratchet so I had to use a box-end wrench.  12 mm (unlike the 10’s elsewhere).

The other was on the right hand side.  Note there’s a bolt at the point of the “X” in this picture.  At first it looked like it might be related to the valve cover, but it isn’t.  I may need to deal with it later in the process to get the head off (or maybe not–we’ll see), but it’s not necessary to remove now.  Again, space was tight and I needed to use a 12 mm box end wrench. 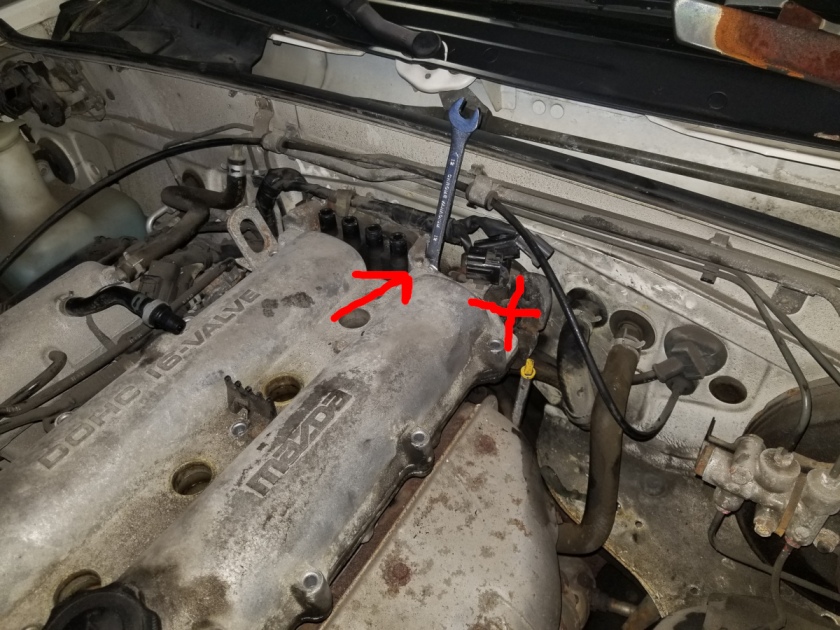 Once those two bolts were removed, the valve cover lifted right off.

And here’s the valve cover itself. 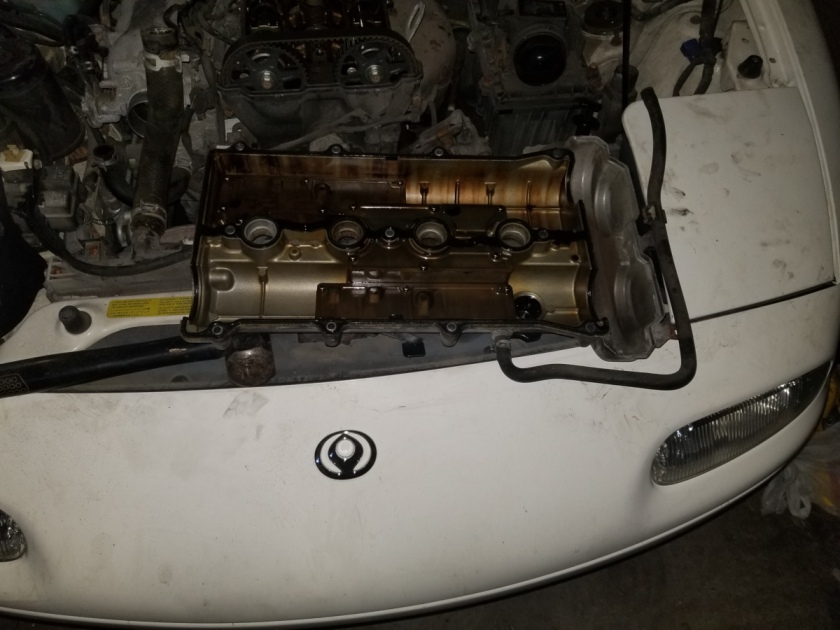 I set the valve cover aside and moved on to the next step, removing the radiator (to get easier access to the front of the engine).

First step in removing the radiator is draining the coolant,  There’s an opening in the under-engine splash guard, through which one can access the drain port.  A large Phillips (+) screwdriver can be used to remove the plug.

While the coolant was draining, I was set in place to put the plug back if the catch pan started to get close to full to allow me time to empty and replace it.  Only that didn’t turn out to be necessary.  This is all I got:

I poured the used coolant into a mostly empty coolant jug (had some water in it).  I didn’t exactly measure it, but the coolant came to quite a bit less than a gallon, probably less than half.

Note, after draining coolant, be sure to clean up any spills.  The stuff can be toxic to animals (and to humans too, but humans can…maybe…be trusted to know not to drink the stuff).

On the driver’s side, there’s this electrical connector to disconnect and one bolt to remove up at the top (as you’ll see later, the arrow indicating the bolt is not quite right).

Passenger side is similar, although there’s a different electrical connector (again, arrow is not quite right).  Also, there’s the hose to the coolant reservoir. 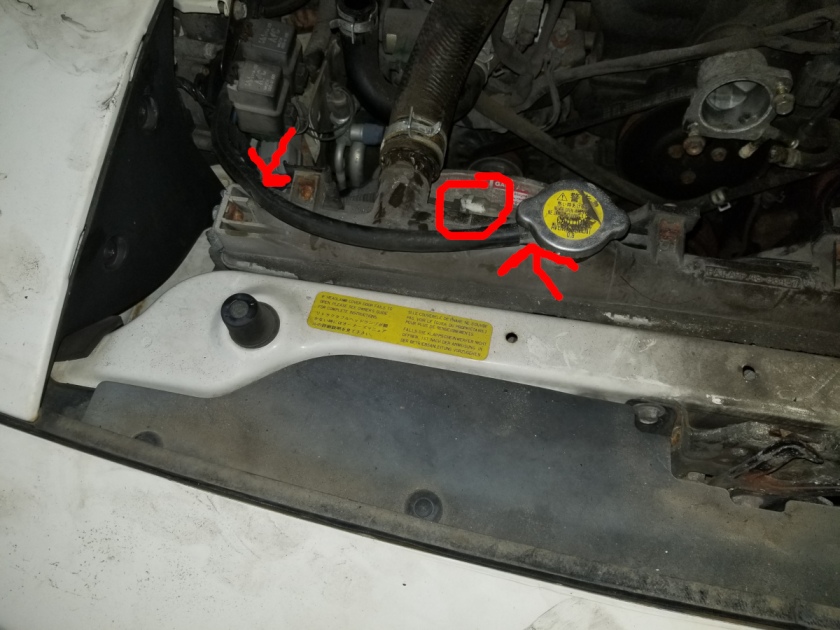 Once the hose is disconnected you can remove the bolt on this side.  There are other bolts in here that you don’t need to mess with.  Just this one.

Now the bolt on the other side: 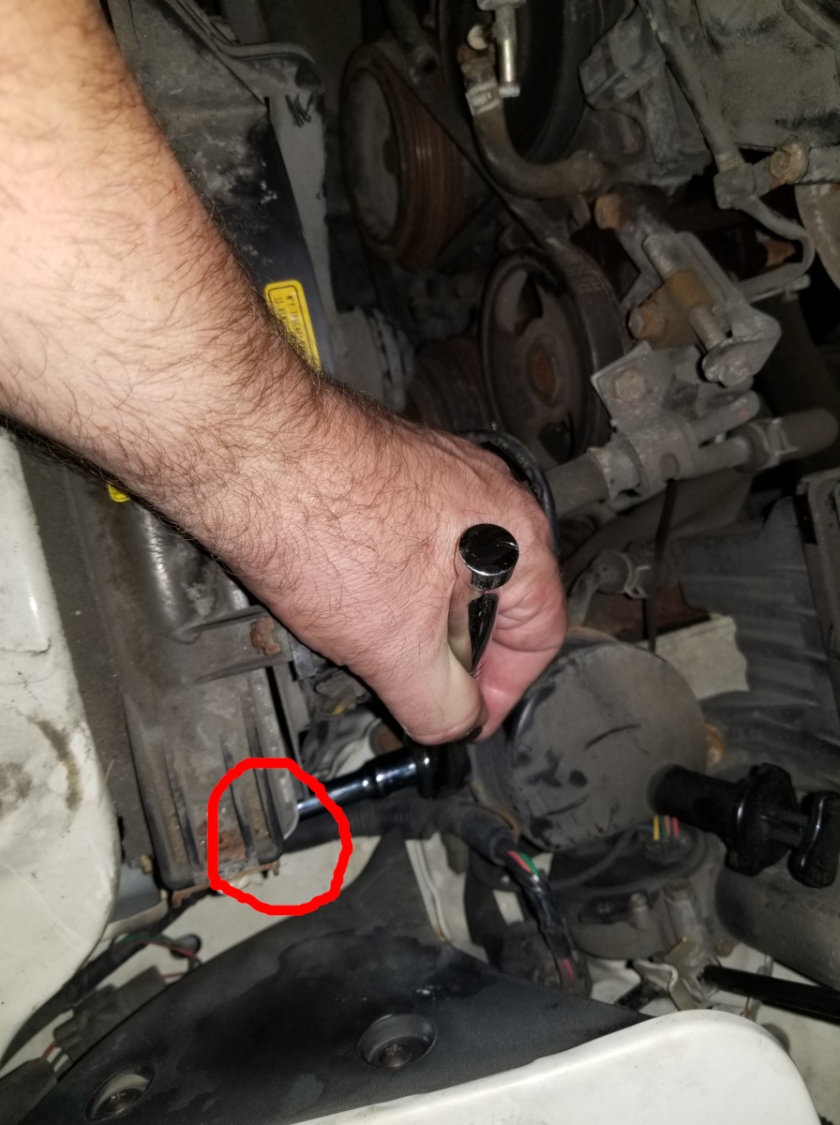 Now comes a more challenging part.  There’s a bolt that secures a bracket holding the AC lines to the bottom of the radiator.    It’s next to impossible to get at from the top.  You cant’ even see it in this picture way down there in the bottom.  The AC hoses and the sway bar running across there interfere with getting access with a wrench. 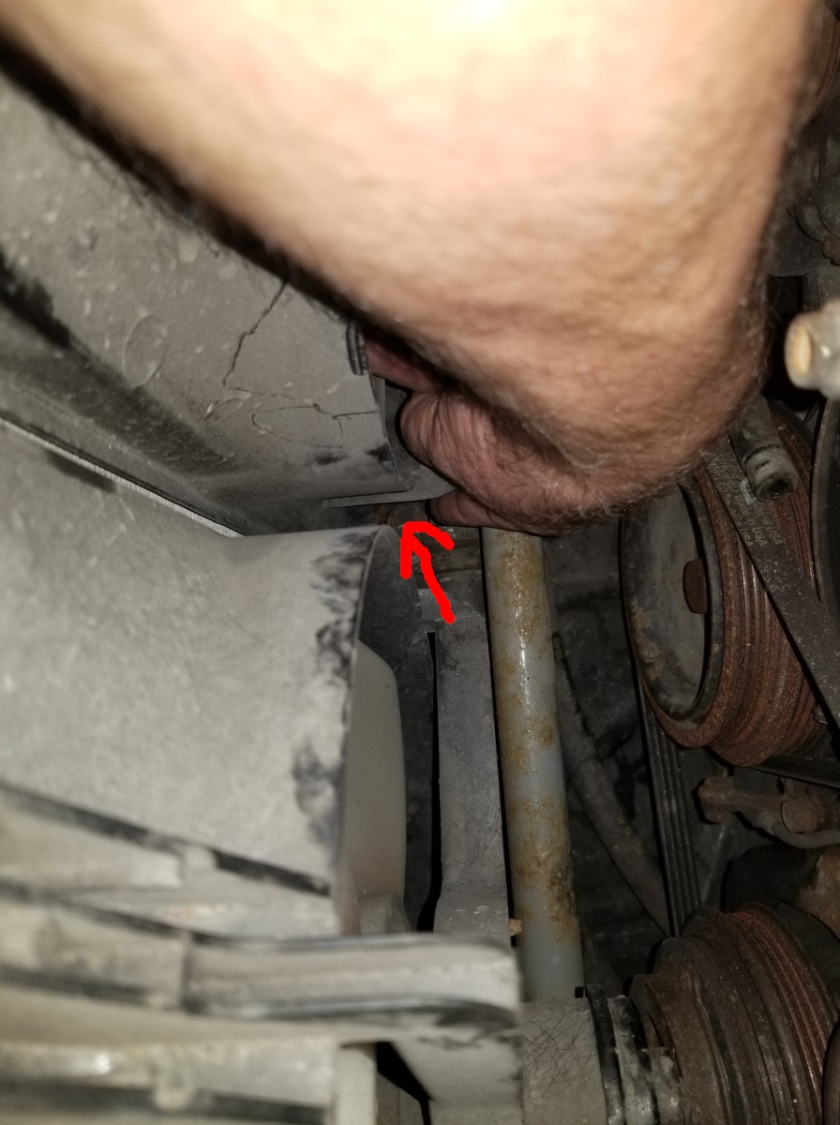 The other issue is the AC hose.  You need to get access underneath to remove the clamp that secures the hose.  There’s a port in the under engine splash guard that can be used for that purpose but at this point it’s probably best to just remove that splash guard entirely.

On this car, the splash guard was severely beat up.  It had been poorly installed in the past with missing bolts so that parts hung down and dragged, causing the owner (well, me, to be honest) to cut away pieces that were most seriously dragging.

Because of the cramped conditions under the car, I couldn’t get good pictures of the removal process, but it is quite straightforward.  You go around and remove the nuts and bolts until the whole thing drops off.  They’re all 10 mm.

There was, however, one catch.  One of the nuts was rusted in place badly and in removal I ended up sheering the stud off entirely.  This is particularly bad because this particular one also secures a brace to the front left corner of the bumper cover. 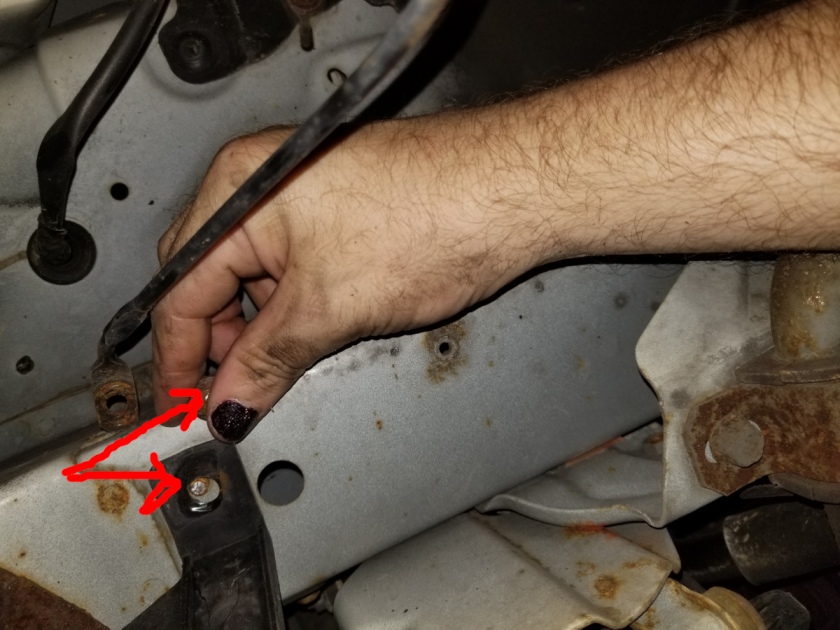 That will have to be addressed when I start putting things back together.

In the meantime we have the bottom radiator hose.  Same deal as with the top radiator hose, and removed the same way. 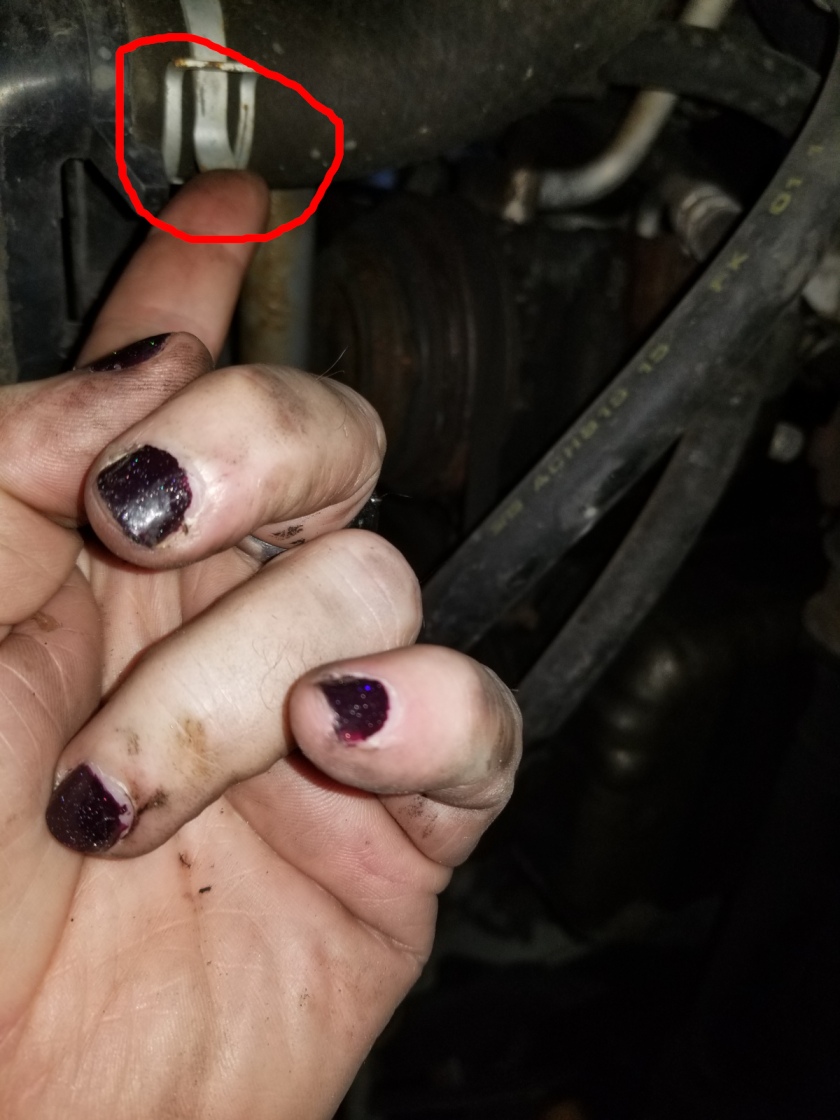 Then there’s the bracket securing the AC hoses.  This proved to be a challenge.  The bolt (10 mm head) screws into a square nut that’s supposed to be “captive” in the bracket only, again with rust, an attempt to turn the bolt just turns.  The plastic arms of the bracket aren’t strong enough to resist the turning and bulge out.  I applied a pair of vice grips to squeeze them down to secure the nut. allowing me to back out the bolt.  I also had to use a four inch extension on the socket.  That just barely fit past the hoses themselves letting me set the ratchet back behind them. 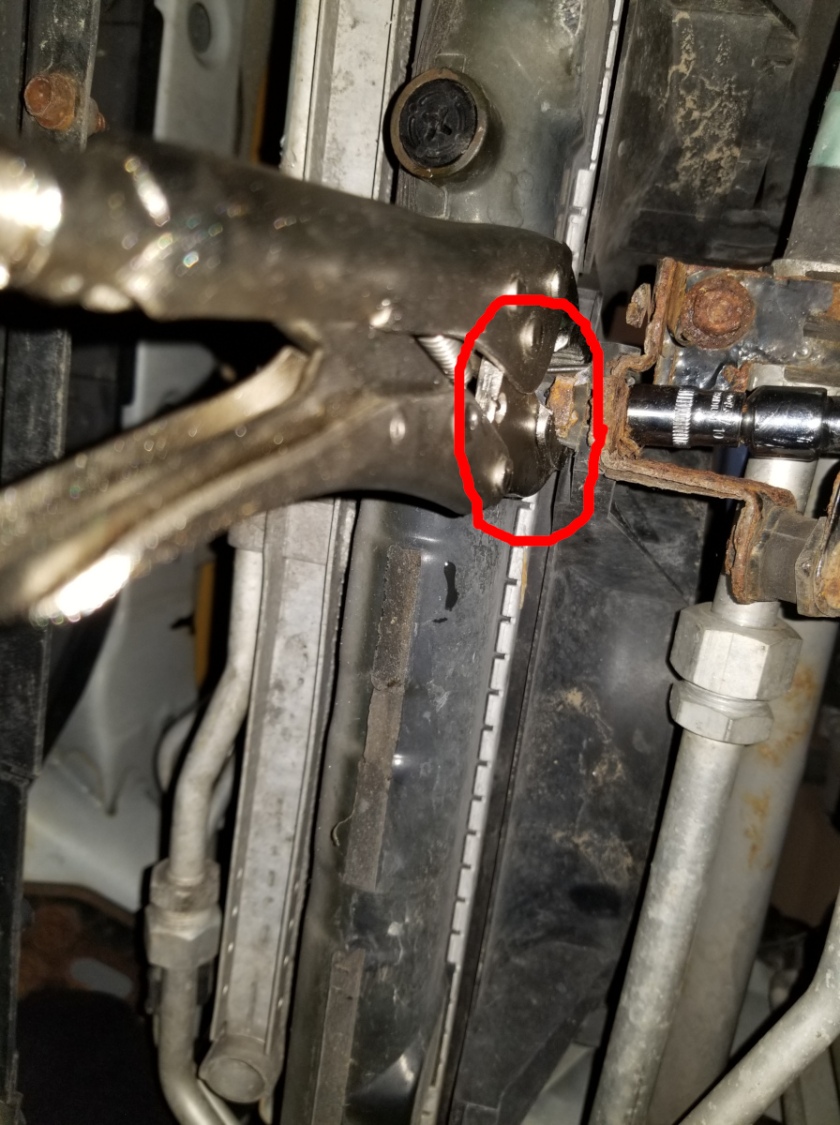 That was the theory anyway.  Once again, rust and age conspired against me.  The bracket broke.  Another repair I’m going to have to make later.

But the good side of that was with that out of the way the radiator just lifts right out.

And with the radiator out, I’ve now got some working room in front of the engine.