Last month I got an email ad about a special being run at the Brazilian steakhouse Fogo de Chao.  Normally, I ignore such things but I had long been curious about the place and the deal seemed like a good chance to try it out. 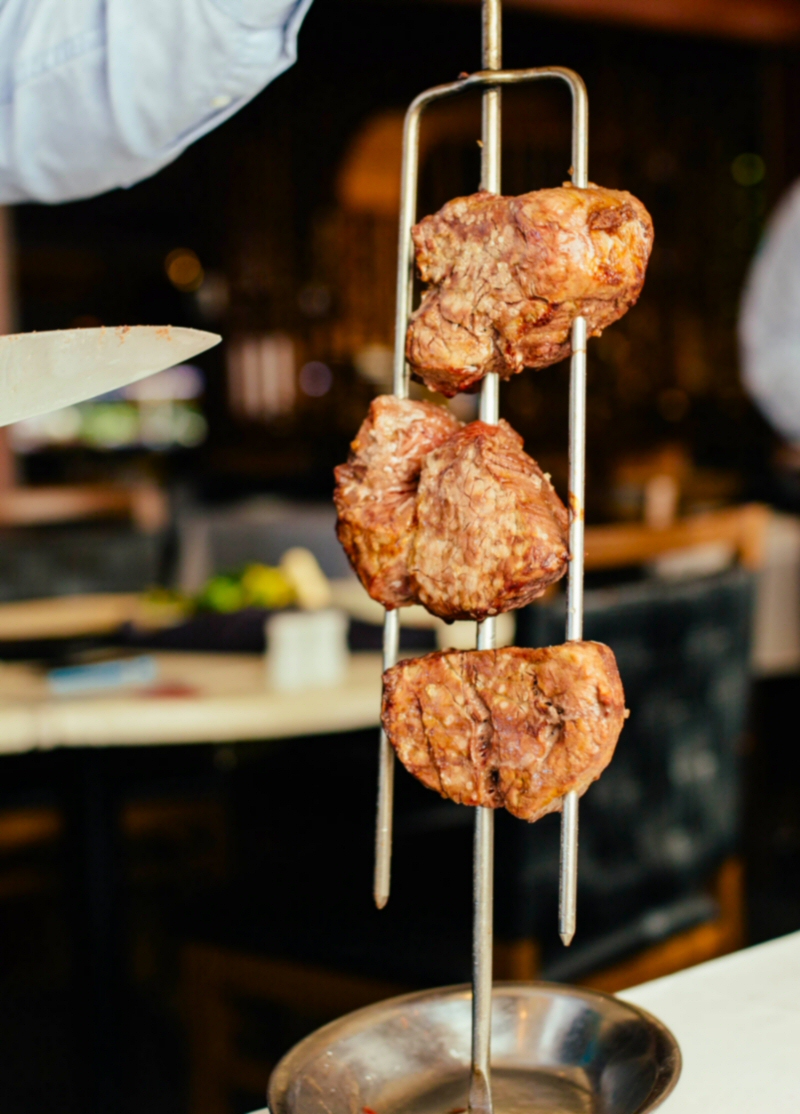 I made reservations (do, if you plan to go there) and went there with my daughter.

Even with the reservations we had to wait.  Which is not unexpected.  After all, they don’t have control over when people who are already seated leave so they can seat the ones who’ve just arrived.  Ended up being about a fifteen minute wait.

Drinks.  They have an extensive wine list.  I can’t drink wine.  It spikes my blood sugar.  I didn’t look to see if they carried distilled spirits.  What they do not have is fountain drinks and certainly no free refills.  They did, however, have Diet Coke in bottles.  The bottle was a little teeny thing.  Eight ounces maybe?  I didn’t find a size written on it, so that’s a guess.

My daughter had some canned soft drink.  I don’t know what it was.  Some imported thing.

You can order a meal off the menu but that’s not the way to do Fogo de Chao.  Instead, what you want is the service that regular price is just over $50 per person.  The special that brought my daughter and me here was less than that ($39), and did not include some of the higher-priced meat cuts, nevertheless that’s what we ordered.  The person who explained the setup and took our drink orders explained the difference but didn’t press when we demurred on the higher cost item.

You start with the “Market Table”, basically a very upscale salad bar.  You get a plate.  The Market Table has vegetables, a number of cuts of cured meats–I think I saw Salami there along with others and the cured leg of some animal, don’t know what–cheeses, fruits, and so forth.  I got a few vegetables and a bit of tomato mozarella salad.

Once you bring your plate (whether you get anything at the market table or not) the fun begins.  Those little disks I mentioned?  They start red side up.  You turn them green side up once you’re ready to have some meat.  What they have are people circulating with skewers of different cuts of meat–or plates in the case of the pork ribs.  When they see green side up they come to your table and offer you some of the item they’re carrying.  If you don’t care for that one, they move on.  If you do want some of that one they’ll start to carve a piece off, then you’ll grab the meat in the tongs so they can finish the cut, and you transfer it to your plate.

You continue in this way until you’ve decided you’ve had enough.  We had several cuts of beef, chicken, and pork.  All were delicious.  The marinated chicken drumsticks were particularly interesting.  They weren’t the full drumstick, just the “head” portion which they said were marinated overnight.  I’ll admit, my daughter didn’t care for hers but I thought they were quite good–although, given a choice I’ll generally go with beef over chicken pretty much any day.

When you’re done, or if you need a break to finish what you already have on your plate simply flip the card over to the red side and they’ll know not to bother you.

It’s expensive, yes, but the food is excellent and there’s plenty of it.  So, I consider this a “special occasions place”.  And I can highly recommend it on that basis.

One thing.  If you’re on any kind of diet, just assume that any day you go to Fogo de Chao will be a “cheat day.”  Food that good should be savored without having to worry about whether you’ll eat too much or what the effect will be on your waistline.