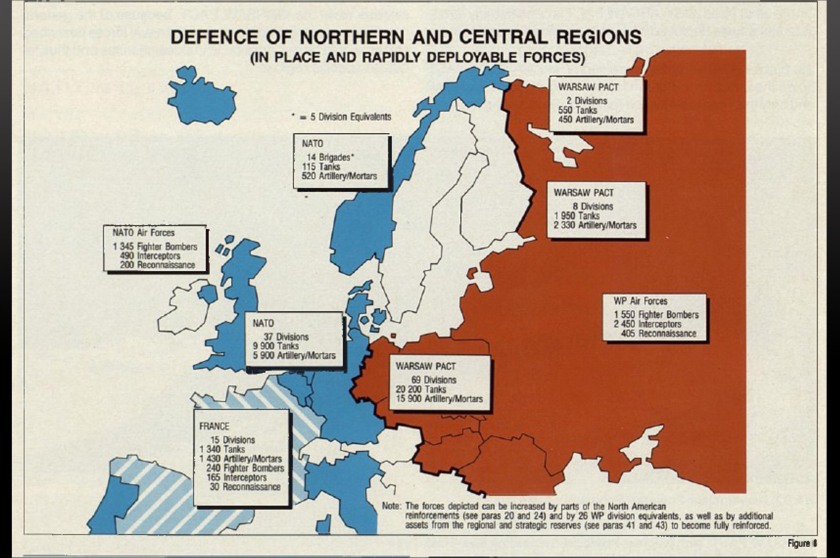 Forces in Europe during the cold war were described to me once this way. Their job was to get the Warsaw Pact leaders to look across the border, look at their own disposition of forces, and decide “not today.”

They didn’t have to win to be successful, they just had to create enough doubt in the minds of the Soviet and Warsaw Pact leadership to get them to hesitate “today” (for any given “today”) and then do it again the next day.  It would be nice to be able to win a conflict, but creating enough doubt that the conflict doesn’t happen, at least not in the battlefield with direct war between the major powers, was sufficient.  As a result, the conflict moved to different venues–proxy wars and, most telling, economic competition.  It was this latter, economic competition, which brought about the downfall of the Soviet Union.  The greater efficiency of the market economy over anything centrally controlled meant that they were forced to open up markets “a little bit” (Gorbochev’s “Perestroika”) which turned into unexpected floodgates and led to the collapse of the Soviet Union.

That creation of uncertainty is the roll of an armed citizenry.  Get would-be tyrants to look at the citizenry, look at the forces they can count on to enforce their orders, and decide “not today.”

And it’s worked.  Because of that, would-be tyrants of all political stripes have been reduced to chipping away at the edges of liberty–a bit here, a bit there, but nothing great enough at once to trigger open revolt.

To this end, finding “soundrels” to use as excusses for new oppressive laws and regulations has been a remarkably effective tool.  As H. L. Mencken said, “The trouble with fighting for human freedom is that one spends most of one’s time defending scoundrels. For it is against scoundrels that oppressive laws are first aimed, and oppression must be stopped at the beginning if it is to be stopped at all.” All too many pro-freedom people are less willing to do so when it makes them look like they are defending bad actors.  Yet that is exactly what is needed.  If you want to defend Freedom of Speech at all you must defend it for people who say the most vile and despicable things or the very exceptions you make against those things will, not may but will, be used against you all too soon.  Libel, Slander, and direct and immediate incitement to violence is about as far as one can safely go in a restriction on speech and even those restrictions are not without their dangers to liberty.  Likewise for any other of the freedoms we used to take for granted.

The restrictions start to be applied, then, not on actual controversy but on things that have sweeping consensus as being bad.  Restricting “hate speech” by “Nazis” is not done because these beliefs have widespread support in the population, but because they have extremely little support.  The numbers get inflated (to increase the perceived “risk”) by including “white supremacists” with “white supremacy” having a very flexible and elastic definition to include anyone who argues that behavior is far more important than skin color in determining life’s outcomes in the US.  But actual Nazis are so few that they have little support and people are afraid to defend freedom when its restriction is applied to them because “defending freedom” gets described as “supporting Nazis” and almost nobody wants to be seen as supporting Nazis.

This is a war of words and ideas that must be fought as words and ideas.  The same reasons why defending liberty must include defending scoundrels also means that you can’t just go shooting folk who disagree with you politically.  Your reasons for restricting liberty against those you see as scoundrels will just as easily be turned against you as theirs.

So it becomes a war of incremental approaches, one those favoring Freedom have barely begun to engage in.  And so, in the course of things, the other side has gained almost total control of the warfighting forces of that particular battlefied:  Education, News media, and Entertainment.  Walter Cronkite was once described as “the most trusted man in America.” All that meant was that he could lie with impunity and no one would call him on it.  And those who did know that some particular statement was, contrary to fact let us say (example his reporting of the Tet Offensive and its aftermath in the Vietnam War), they’d go to his next statement and just assume its truth because “Most Trusted Man in America.” (Gell Mann amnesia has long been with us.)

For these and other reasons those opposed to human freedom been uncomfortably successful at that incremental strategy.  That they’ve been reduced to that approach is actually a major success of having an armed citizenry.

Fortunately, the order of battle on the words and ideas front has been changing.  The rise and increasing ubiquity of the Internet and “New Media”, indy publishing being able to get widespread dissemination, even things like this blog allow people to get ideas, information, and viewpoints out without being completely dependent on media controlled by the opposition camp.  So far it’s just a start, but it’s growing.  Keep the faith and keep the pressure on.

And keep your guns to hand so that, when it comes to forcibly cramming their tyranny down their throats, they keep deciding “not today.”

One thought on ““Not Today””

Leave a Reply to Joe in PNG Cancel reply