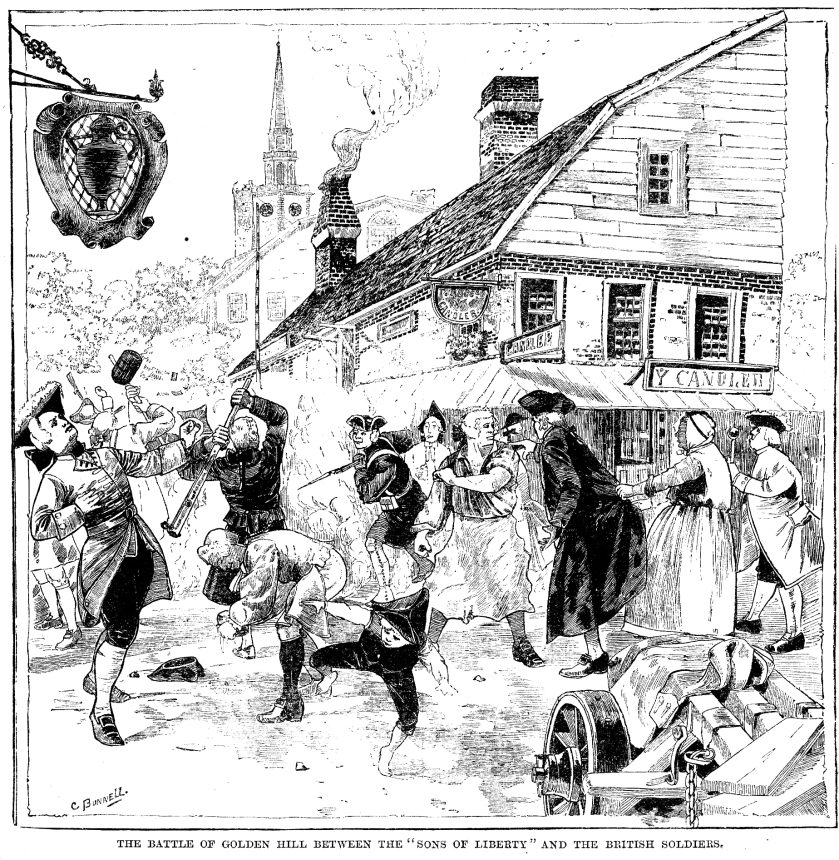 However, the build-up, including violent clashes, had been going on for years before it turned into open warfare.

The Battle of Golden Hill, which could be considered the first blood spilled in the American revolutionary struggle, happened on this date (January 19) in 1770, five years before Lexington and Concord, before the “Boston Massacre”, before the “Tea Party”, before many of the events that we consider harbingers of the rise in rebellion of the American colonies.

The issue started several years before that, shortly after the Stamp Act, which had given the “no taxation without representation” idea its impetus, was repealed.

On May 21, 1765, the Sons of Liberty, a group dedicated to agitating for liberty in the colonies and their “rights as Englishmen” (Remember, at this time the American colonists thought of themselves as British, not as people of a new nation), erected a “Liberty Pole to commemorate the repeal of the hated Stamp Act.  (Note, another source claims the pole was erected on June 4, George III’s birthday.)  The pole carried with the words “King, Pitt, and Liberty”. Pitt, was the individual in Parliament who argued the colony’s case.

British officials hated the pole and soon, in retaliation for New York’s government refusing to enforce the Stamp Act, cut it down.  A second pole was quickly erected.  This, too, was soon cut down.

A third pole was put up which the British, no doubt with much shrugging and shaking of heads (“those crazy Colonials just will not give up”–some British officer, probably).  It remained until 1767 when New York celebrated the repeal of the Stamp Act.  British officials, in response to this, had this third pole cut down.

The colonials, undeterred, put up a fourth pole.  This one secured with iron bands to make it much harder to cut down.

Not long after the erecting of the fourth pole, Parliament passed the Quartering Act, requiring people in the colonies to provide housing for British troops in excess to their local barracks’ capacity. (If you’ve ever wondered why the 3rd Amendment is in the Bill of Rights.  This is the reason.) New York, once again, mostly refused to enforce that law.  Parliament responded by dissolving the New York government and installing one of their own.  The Sons of Liberty responded to this by posting a broadside (basically large posters) titled “To the Betrayed Inhabitants to the City and Colony of New York.” All of this took time, and brings us to the beginning of 1770.

On January 13, 1770 the British military attempted to bring down that fourth liberty pole, using gunpowder (because of the iron bands).  This attempt failed but a second on the 16th succeeded.  They took the wreckage of the pole and dropped it on front of a tavern owned by a Mr. Montagne–where the Sons of Liberty were wont to meet.  They then began their own campaign of broadsides, calling the Sons of Liberty the real enemies of society who thought their freedom depended on a piece of wood.

On January 19th several individuals, including one Isaac Seares, tried to stop some British redcoats from posting their broadsides.  Seares managed to capture some of the soldiers while others ran to their barracks to call for reinfocements.  Seares marched his prisoners toward the mayor’s office.

The reinforcements, numbering about twenty men, arrived, but so did a crowd of townsfolk.  The townsfolk badly outnumbered the soldiers and surrounded them.  Other soldiers attempted their rescue but were ordered back to their barracks.  While being escorted back to their barracks they had reached Golden Hill when an officer ordered the soldiers to draw bayonets and “cut their way through them.”  The soldiers were armed with their bayonets while the citizens were either unarmed or armed with makeshift weapons.  According to one source those citizens with sticks stood their ground in the narrow passageway defending their defenseless compatriots.

While the scuffle was going on, more soldiers arrived to disperse the other soldiers before things got totally out of hand.

In the end several soldiers were badly bruised with one being seriously wounded.  A number of the townsfolk were wounded.  Some sources claim that one townsperson was killed but this is disputed.

Afterward, the Sons of Liberty asked the Mayor for permission to erect a fifth Liberty Pole on public land.  This was denied.  As a result, the Sons of Liberty bought a parcel of land where they erected their pole.  This one had iron bands extending two thirds the way up the pole.

Also, for some strange reason, this fifth pole lacked any mention of the King (or of Pitt).  This one simply said “Liberty and Property.”